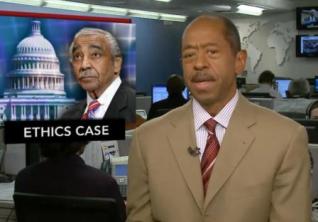 WASHINGTON (AP) — Rep. Charles Rangel faces an almost certain censure by the House, a devastating defeat for a 40-year veteran who insisted to the end that he never meant to violate House rules. The Skanner News Video

If the House votes for censure Thursday as expected, the New York Democrat will have to humbly walk to the front of the chamber to receive his punishment. He'll stand in front of his colleagues while Speaker Nancy Pelosi — in one of her most solemn duties — reads him a resolution condemning his ethical misbehavior.

The House ethics committee took a hard line toward Rangel, 80, the former chairman of the House Ways and Means Committee. Most past censures involved congressmen who enriched themselves. Rangel was not charged with lining his pockets, although he did fail to pay taxes for 17 years on income from a vacation villa he owns in the Dominican Republic.

In Rangel's case, the House ethics committee said, his long pattern of fundraising and financial misdeeds justified the most severe penalty short of expulsion.

Fellow Democrats on the committee showed Rangel little more mercy than Republicans, as the committee of five members from each party voted 9-1 on Nov. 18 to recommend censure.

Rangel has had a difficult time accepting the punishment and planned to argue on the floor of the House for a lesser reprimand — a vote disapproving his conduct but without the requirement that he stand before his colleagues to accept the discipline.

His argument is that censure is reserved for corrupt congressmen, and he's not one of them.

In a last-ditch attempt to influence the House, Rangel e-mailed about 25,000 campaign supporters Wednesday. He asked them to call the Capitol switchboard to get connected to their congressmen and ask them to vote against censure.

Rangel was apologetic in his plea.

"I am truly sorry for mistakes and would like your help in seeing that I am treated fairly," he wrote.

Rangel said he posted arguments for a reprimand on his website, "which shows that the recommendation for censure is excessive and that my lapses do not rise to the level of transgressions of those censured in the past."

Rangel filed misleading financial disclosure reports for a decade, leaving out hundreds of thousands of dollars in assets he owned. He used congressional letterheads and staff to solicit donations for a center named after him at City College of New York.

The ethics committee found that he contacted businesses and their charitable foundations that had issues before Congress and, specifically, before the House Ways and Means Committee that Rangel formerly headed. He was not, however, charged with taking any action on the donors' behalf.

Rangel also set up a campaign office in the Harlem building where he lives, despite a lease specifying the unit was for residential use only.

Rangel has paid the Treasury $10,422 and New York state $4,501 to fulfill another ethics committee recommendation. The amounts were to cover taxes he would have owed on his villa income had the statute of limitations not run out on his tax bills.