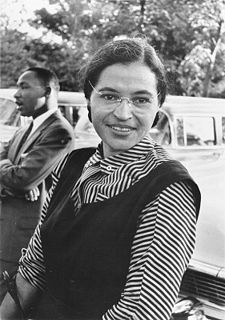 Fifty-five years ago today, Dec. 1, Rosa Parks refused to give up her seat to a white passenger on an Alabama bus.

Google has dedicated its homepage doodle to Rosa Parks and they are not the only one commemorating her anniversary today. Outkast, the hit Atlanta based hip-hop group has a single out in which they dedicated to Parks. The Skanner News Video

After Parks was arrested, on Dec. 1, 1955, a public boycott of the Montgomery, Alabama bus line erupted. Led by Dr. Martin Luther King Jr., the bus strike lasted for 381 days.

Find out more about Rosa Louise Parks the courageous woman who became an icon of the civil rights movement.