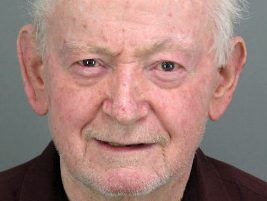 A 78-year-old South Carolina man with more than a dozen weapons in his home has been arrested after federal authorities say he told a nurse he was thinking about killing President Barack Obama.

Michael Stephen Bowden, a former NYPD officer and New York firefighter,  was being held Friday at the Spartanburg County jail. Bowden was arrested recently after he told a nurse at a Veterans Affairs clinic in Spartanburg he was thinking of killing the president, according to a sworn statement by a U.S. Secret Service agent.

During a checkup at the clinic Nov. 16, a nurse asked Bowden if he ever thought about killing himself. According to the affidavit, Bowden told the nurse, "Yes, I would like to shoot the president then myself."

Bowden repeated those words to another nurse, adding that he wanted to kill Obama "because he is not doing enough to help African Americans."

Bowden, who is white, also had suicidal tendencies during a screening in April, according to the statement.

The next day, federal agents searched the home Bowden shares with his wife and adult son, finding three semiautomatic handguns and a semiautomatic rifle under Bowden's bed. Agents also found 13 other guns throughout the home, including a loaded shotgun near the front door.

When asked about his comments to the nurses, Bowden admitted he made them and also gave agents a sworn, written statement, saying "if I had the opportunity to put Obama against the wall and shoot him, I would."

U.S. Magistrate Judge Kevin McDonald ordered that Bowden be held without bond until a mental evaluation had been completed. An attorney for Bowden did not immediately respond to a message Friday.

WYFF-TV reported Bowden was in the Navy for four years and was a former New York City policeman and fire captain.