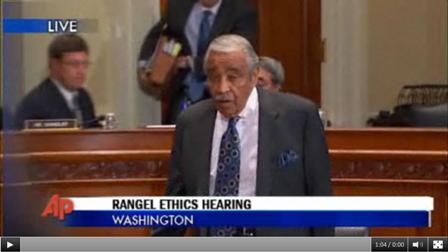 WASHINGTON (AP) — Rep. Charles Rangel of New York is pleading for "fairness and mercy" from a House ethics committee that will recommend punishment for his ethical wrongdoing.

The Harlem Democrat released a contrite statement Thursday, saying: "There can be no excuse for my acts of omission. I've failed in carrying out my responsibilities. I made numerous mistakes. But corruption and personal enrichment are certainly not part of my mistakes."
The Skanner News Video here
The panel will deliberate and likely recommend sanctions to the House.

Rangel was convicted by a jury of his congressional peers of 11 counts of violating House rules.

One possible form of punishment is a House vote to censure Rangel for his misconduct.

WASHINGTON (AP) — Convicted by his colleagues on 11 counts of ethical wrongdoing, Rep. Charles Rangel of New York is about to learn his likely punishment by the House as his lengthy ordeal nears a painful end.

The House ethics committee was to deliberate behind closed doors Thursday after a short public hearing, in which the 80-year-old Harlem Democrat can make his case for a light punishment.

One possible outcome is a committee recommendation that the House vote to censure Rangel for fundraising and financial misdeeds that violated congressional rules. Other possible punishments would be less serious: a reprimand, a fine or report deploring his conduct.

After an investigation that began in the summer 1998, Rangel was convicted Tuesday by a jury of his House peers on 11 of 13 charges of rules violations.

He was found to have improperly used official resources — congressional letterheads and staff — to raise funds from businesses and foundations for a college center named after him.

Some of the donors had business before Congress and especially the House Ways and Means Committee, where Rangel served as the ranking minority member and then chairman.

A brochure with some of Rangel's solicitation letters asked for $30 million, or $6 million a year for five years.

He also was found guilty of filing a decade's worth of misleading annual financial disclosure forms that failed to list hundreds of thousands of dollars in assets.

And the jury of eight House members concluded that he violated tax laws by failing for 17 years to report — and pay taxes on — rental income from a beach villa in the Dominican Republic.

A censure vote is a resolution disapproving a member's conduct. The lawmaker then is escorted to the front of the House chamber, known as the well, by the sergeant-at-arms. While standing before his colleagues, the speaker of the House then issues an oral rebuke.

A lesser reprimand also requires a House vote of disapproval, but without the member appearing in the well.

Rangel has asked the ethics committee and the public to take into account his 40 years of service in the House, where he's tied for fourth in seniority.

Until March, when he relinquished his chairmanship of the Ways and Means Committee, Rangel wielded great power over tax legislation. He stepped down in March after the ethics committee concluded, in a separate case, that Rangel improperly allowed corporations to pay for two trips to the Caribbean.

He complained at his ethics trial Monday that the proceeding was unfair because he needed time to obtain new lawyers. Rangel argued that his former defense team abandoned him after he paid them nearly $2 million — but he could afford no more. The panel rejected his request, and Rangel walked out of the proceeding.

Rangel, a founder of the Congressional Black Caucus, remains a political kingpin in New York's famed Harlem neighborhood and is unlikely to resign. He won re-election earlier this month.

His conviction was a fresh setback for Democrats who lost control of the House to the GOP in the midterm elections, providing support for Republican candidates' assertions of bad conduct.