By The Skanner News
Published: 15 November 2010 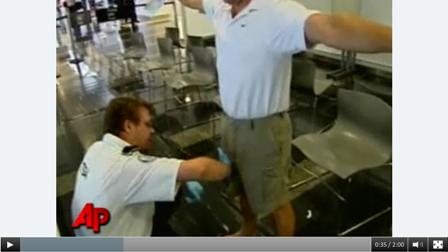 A California man got thrown out of San Diego's airport when he refused a revealing full-body scan and then an alternative pat-down, telling a Transportation Security Agent, "If you touch my junk, I'll have you arrested."

John Tyner, 31, said he was told he could face a civil lawsuit and a $10,000 fine for leaving the screening area before the security check was complete, according to news reports and his blog.
The Skanner News Video here
Tyner captured his dust-up with TSA officials in cell phone recordings now going viral, highlighting the issue of privacy and the debate over the latest screening technology.

"It seems like it struck a chord," Tyner, a software engineer from Oceanside, Calif., told the North County Times. "I think people are tired of having their rights stripped away, especially in the face of not very improved security."

Tyner's story began Saturday morning when he went to San Diego International Airport for a flight to South Dakota for a pheasant-hunting trip with his father-in-law, according to The San Diego-Union-Tribune.

At first, he balked at submitting to a full-body scan, according to his blog and news reports. He told the newspaper he was surprised to learn the airport had the machines because the airport's website said it did not.

He opted for the metal detector and basic pat-down, but refused the latter after learning it involved a "groin check."

"I looked him straight in the eye and said, "If you touch my junk, I'll have you arrested," he wrote on his blog.

More agents arrived, and one told Tyner he could be fined and subject to a lawsuit if he didn't complete the screening, the North County Times said.

"The whole thing just seemed ridiculous. ... I don't intend to fly until these machines go away," he told CNN.

TSA Administrator John Pistole defended the system today, saying that all passengers want to know that their fellow fliers have been properly screened for weapons like box cutters, liquid explosives or a shoe or underwear bomb.