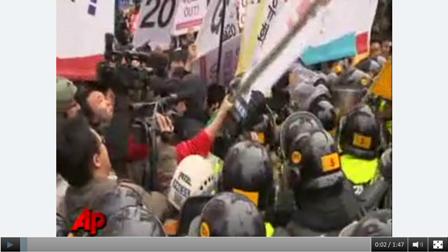 The Group of 20 summit, held for the first time in Asia, has become the centerpiece of international efforts to revive the global economy and prevent future financial meltdowns.

Failure in Seoul could have severe consequences. The risk is that countries would try to keep their currencies artificially low to give their exporters a competitive edge in global markets. That could lead to a destructive trade war. Countries might throw up barriers to imports — a repeat of policies that worsened the Great Depression.

Hopes had been high that the Group of 20 — encompassing rich nations such as Germany and the U.S. as well as growing giants such as China and Brazil — could be the world forum for hashing out an economic way forward from financial crisis.

But agreement appeared elusive as the summit began, divided between those such as United States that want to get China to allow its currency rise and those irate over U.S. Federal Reserve plans to pump $600 billion of new money into the sluggish American economy, effectively devaluing the dollar.

Obama told fellow leaders that the U.S. cannot remain a profligate consumer using borrowed money and needs other countries to pull their weight to fix the world economy.

"The most important thing that the United States can do for the world economy is to grow, because we continue to be the world's largest market and a huge engine for all other countries to grow," Obama said at a news conference.

"If the rich countries are not consuming and want to grow its economy on exports, the world goes bankrupt because there would be no one to buy," he told reporters. "Everybody would like to sell."

So far, officials can't even agree on the agenda, much less a draft statement. Government ministers and senior G-20 officials have labored for days without success to come up with a substantive joint statement to be issued Friday, G-20 summit spokesman Kim Yoon-kyung said.

Delegations will be working all night, officials from three countries said. One, speaking on condition of anonymity due to the sensitivity of the matter, said he doubted they'd reach agreement by morning.

"The standoff between the G-20 countries is so obvious that even the financial markets are having to acknowledge that this is very damaging for sentiment," said Stephen Lewis, chief economist for London-based Monument Securities.

At best, leaders will "probably come up with a statement indicating that it's good for the IMF to monitor what the G-20 countries are doing to reduce imbalances," he said. "But I doubt they'll go much further."

Leaders had a working dinner Thursday at Seoul's grand National Museum of Korea, greeted by sentries dressed in royal garb and escorted by children in traditional Korean dress. Outside, a few thousand protesters rallied against the G-20 and the South Korean government. Some scuffled with riot police, but the march from Seoul's main train station was largely peaceful.

"We can put people watching this summit at ease by reaching a concrete agreement that takes a step forward," South Korean President Lee Myung-bak said. "You, world leaders, know that our global economy can achieve a continuous, balanced growth with international solidarity."

However, his failure to announce that he and Obama, among the staunchest of allies at the summit, had agreed on a long-stalled free trade accord as expected did not bode well for the mood for compromise.

Besides providing a political boost for both, an agreement could have helped shift the tone for a summit where common ground looks increasingly narrow and nations appeared set to defend their short-term economic interests above all else.

Lewis said failure to reach a free trade deal with South Korea was a setback that undermined Obama's prestige, and "probably a bad sign" for the rest of the G-20 summit. He said he was pessimistic about chances of a successful outcome.

A major issue confronting the G-20 is how to craft a new global economic order to replace one centered on the U.S. running huge trade deficits while countries such as China, Germany and Japan accumulate vast surpluses. The U.S. runs a trade deficit because it consumes more foreign products than it sells to others.

Obama made a pitch for balanced recovery across the globe and pushed for exchange rates based on the market. The message was primarily aimed at China, whose trade surplus with the U.S. is bigger than with any other trading partner. The U.S. contends that China deliberately undervalues its currency, the yuan, which gives it is exports an unfair competitive edge.

Chinese President Hu Jintao assured Obama during talks Thursday that China has an unswerving commitment to pressing ahead with currency reform, said Ma Zhaoxu, spokesman for the Chinese delegation.

But China does not want to discuss its trade or currency conflicts with the U.S. in an international forum like the G-20, said Yu Jianhua, director general of the Department of International Trade and Economic Affairs in the Commerce Ministry.

The currency spat intensified after the U.S. Federal Reserve announced plans to purchase $600 billion in long-term government bonds to try to drive down interest rates, spur lending and boost the U.S. economy.

Analysts say it could spark an influx of cash into the financial markets of emerging nations in search of higher returns, making their currencies stronger, their exports more expensive and creating bubbles in stocks and other assets. While a cheaper dollar would benefit U.S. exports, it could also trigger a so-called currency war as countries race to devalue their currencies.

A U.S. proposal to limit current account surpluses and deficits to 4 percent of gross domestic product as a way to reduce trade gaps has met with opposition.

"Targets are neither economically appropriate or appropriate from a financial perspective," German Chancellor Angela Merkel said. "Current account balances are hard to target. What's important is that we don't resort to protectionist measures." Germany is the world's second-biggest exporter after China.

British Prime Minister David Cameron said nations with large budget deficits have a responsibility to deal with them.

"The alternative isn't some wonderland of continuous growth, the alternative is the markets questioning your economy, it's your interest rates rising, it's confidence falling and you see your economy go into the danger zone that others are in," he said.

Richard Portes, president of the Center for Economic Policy Research in London, said he shares Bank of England Gov. Mervyn King's fears that "the possibility that currency wars and global imbalances might lead to severe trade protectionism over the next year or so."

After the summit, many of the leaders head to Japan for the Asia-Pacific Economic Cooperation forum summit. They are expected to agree to take steps toward a sweeping Pacific-wide free trade agreement but some members have resisted.