Obama Flies to India, Looking to Boost Us Economy 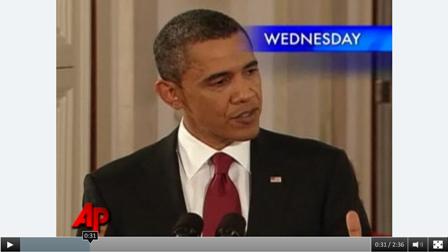 MUMBAI, India (AP) — President Barack Obama hasn't been able to drive down unemployment in America, so he's coming to India in search of U.S. jobs.

Four days after his party suffered heavy, economy-influenced losses in Congress, the president will arrive Saturday in Mumbai, India's booming financial center, where he will meet with local business leaders and with American executives who have traveled to India in search of billions of dollars in trade deals.

Meanwhile, the GOP is circulating a questionable claim from an Indian news agency that the trip will cost $200 million a day, including 34 warships to be stationed off the Indian coast. The White House, the Secret Service and the Pentagon are calling the claims false, and dozens of U.S. media sources are also questioning the numbers.

The White House hopes to announce agreements on aircraft and other exports, and generally broadcast that America is open for business with burgeoning India and its 1.2 billion residents.

The administration says that jobs and the U.S. economy are the focus of Obama's 10-day Asia trip, a message aimed at inoculating him against any criticism that he is concentrating on foreign affairs while Americans are suffering with unemployment at 9.6 percent. He left Washington shortly after the government reported the economy added 151,000 jobs in October but still not enough to lower the jobless rate.

The president said the jobs report was encouraging but "not good enough." In a gesture toward Republicans who won control of the House and made strong gains in the Senate in elections Tuesday, Obama said he was open to "any idea, any proposal" to get the economy growing faster. Republicans generally say the answer is more tax cuts and looser government regulations.

On his foreign trip, the longest of his presidency so far, Obama's business-first message is aimed particularly at India, where he is spending three full days. That's the longest amount of time in any one country on a trip that's also taking him to Indonesia, where he lived for four years as a youth, to South Korea for a meeting of the Group of 20 developed and developing nations and then to Japan for an American Pacific Economic Cooperation forum.

Obama's popularity generally has held steady overseas. Nonetheless, he will be meeting with leaders certain to be aware his political strength has weakened at home.

U.S. and Indian officials have stressed the close ties that have developed between the world's two largest democracies over the past decade. It's a relationship both countries hope will expand and improve — partly, in the U.S. view, as a counterbalance to China's growing power.

Obama will be speaking to a gathering of Indian and American chief executives on Saturday, and he's expected to announce the completion of job-producing commercial deals. The U.S. has been looking for India to finalize purchases of Boeing aircraft and marine engines produced by Caterpillar, among other exports.

However, serious disagreements remain, and they appear unlikely to be resolved during Obama's visit.

India has raised concerns about the billions of dollars in military aid the U.S. is funneling to Pakistan, which is India's archrival but a linchpin for Washington and its allies in the war in Afghanistan. Leaders here also are wary of the increasing rhetoric by U.S. politicians against the outsourcing of jobs abroad, including to India.

A recent move by Congress to increase fees on high-tech workers' visas, relied on by some Indians going to work in America, also has rankled here.

In an interview with the Press Trust of India, Obama said, "As president, I have a responsibility to support jobs and opportunity for the American people, and I believe the U.S.-India economic relationship can and should be a 'win-win' relationship for both of our countries."

He was noncommittal when asked about lifting a ban on the export of certain military goods to India and whether the U.S. would support India's bid for a permanent seat on the U.N. Security Council.

Obama will spend about a day and a half in Mumbai before heading to New Delhi, the capital, for meetings with government leaders including Prime Minister Manmohan Singh.

Obama also is taking time while in India to visit cultural sites, including a museum in a home where Mohandas Gandhi once lived, and to pay respect to the victims of the 2008 terror attacks that left 166 people dead across Mumbai. Obama and his entourage are staying at the Taj Mahal hotel, one of the main targets of the attacks.