By The Skanner News
Published: 05 November 2010 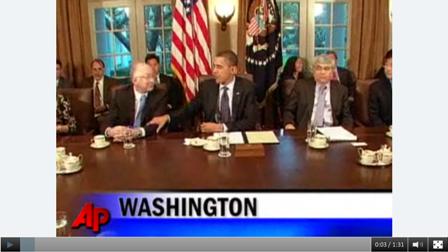 At the White Houses, Obama said his administration was ready to work across party lines in a fresh attempt to "focus on the economy and jobs" as well as attack waste in government. In a show of bipartisanship, he invited top lawmakers to the White House at mid-month, and the nation's newly elected governors two weeks later.

Rep. John Boehner, R-Ohio, in line to become the new speaker of the House, brushed aside talk that the No. 1 GOP goal was to make sure Obama is defeated at the polls in 2012. "That's Senator McConnell's statement and his opinion," he told ABC, referring to the party's leader in the Senate and adding that his own goals included cutting spending and creating jobs.

But tentative talk of compromise competed with rhetoric reminiscent of the just-completed campaign.

In a speech at the conservative Heritage Foundation, Kentucky Sen. Mitch McConnell said the only way to achieve key party legislative goals such as ending government bailouts, cutting spending and repealing the health care law "is to put someone in the White House who won't veto" them.

"There's just no getting around it," he added.

Obama has ruled out accepting repeal of the health care measure, and Senate Democrats responded quickly to McConnell.

"What Sen. McConnell is really saying is, 'Republicans want to let insurance companies go back to denying coverage to people with pre-existing conditions, let them go back to charging women twice as much for the same coverage as men, and let them push millions of seniors back into the Medicare doughnut hole," said Jim Manley, spokesman for Majority Leader Harry Reid, D-Nev.

The maneuvering unfolded two days after elections that swept Democrats out of power in the House and cut deeply into their Senate majority, scripting an uncertain new era of divided government for the final two years of Obama's term.

In the House, Boehner asked members of the Republican rank and file to support him for speaker when the new Congress convenes in early January. His victory is a formality, given the huge 60-member gain he engineered as party leader.

Nor did there appear to be any competition to Rep. Eric Cantor of Virginia as majority leader, the second-most powerful position in the House.

Among Democrats, Speaker Nancy Pelosi has yet to disclose her plans. The most recent speaker whose party lost its majority, Rep. Dennis Hastert of Illinois, resigned from Congress a few months later.

Even before the new Congress comes into office, the old one is scheduled to meet the week after next for a post-election session.

In remarks to reporters after meeting with his Cabinet at the White House, Obama urged lawmakers to avert an income tax increase that could take effect Jan 1, ratify a new arms-reduction treaty with Russia, provide unemployment aid to victims of the recession and extend expiring tax breaks for business.

Congress also must enact a spending bill that permits government to remain in operation, and the issue already has emerged as a likely flash point in the post-election meeting of Congress.

Many House Republicans campaigned on a platform of cutting government spending to levels in effect in 2008, before enactment of an economic stimulus bill and other increases that Democrats passed. Rep. Jerry Lewis of California, the senior Republican on the House Appropriations Committee, notified Democrats during the day that GOP lawmakers will try and implement the cuts when Congress considers the spending bill needed to keep most agencies running for the next eight months. The estimated savings total $100 billion.

"The unmistakable message sent by the American people on Tuesday is that they are justifiably angry at Washington. They want Congress to cut spending," wrote Lewis, who faces an internal challenge in his attempt to become chairman of the panel next year.

At a news conference on Wednesday, the president signaled he was ready to jettison his campaign-long insistence that tax cuts be extended for earners at incomes up to $250,000 but be allowed to expire for higher-income people.

White House press secretary Robert Gibbs made the hint explicit on Thursday. He said extending tax cuts permanently for upper-income earners "is something the president does not believe is a good idea," but that Obama would be open to the possibility of extending the cuts for one or two years.

Republicans responded coolly to the overture. "I take any signal that the president may be backing off his pledge to raise taxes on small businesses as a good sign, but we have to see where this discussion goes," said Rep. Dave Camp of Michigan, in line to become the chairman of the tax-writing House Ways and Means Committee. He and other Republicans say that the expiration of some income tax cuts would be felt on numerous small business owners.

McConnell's speech reflected his status as leader of a minority unable to originate legislation, a position different from the one Boehner will soon hold.

"We have to be realistic about what we can and cannot achieve, while at the same time recognizing that realism should never be confused with capitulation," the Kentucky senator said.

"On health care, that means we can — and should — propose and vote on straight repeal, repeatedly. But we can't expect the president to sign it."

Boehner, in his ABC interview, said he's not sure the president and other Democrats fully understand the message delivered by the voters on Tuesday. "When you have the most historic election in over 60, 70 years, you would think the other party would understand that the American people have clearly repudiated the policies they've put forward in the last few years."