Video: DC-Area Gunman May Have Grievance Against Marines 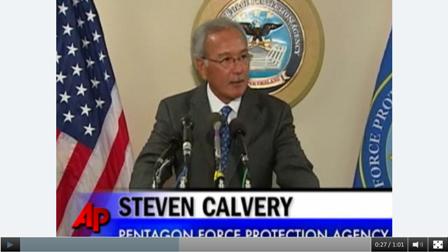 WASHINGTON (AP) — A gunman who fired shots at a Washington-area Marine Corps museum and is believed to be responsible for three similar incidents may have a grievance against the U.S. Marine Corps, the FBI said Friday.

John Perren, the acting assistant director for the FBI's Washington field office, said during a press conference that investigators believe the person takes issue with the institution of the Marines, but not those serving in uniform. Perren said the person has made sure no one has been hurt, and authorities don't believe he wants to harm citizens or Marines.

"We'd like to know what this grievance is and what we can do to try to help solve it," Perren said.

He said the suspect may be dealing with a traumatic event such as loss of a job, financial problems or divorce.

Perren said officials are working under the assumption that the individual was part of the Marine Corps.

Perren urged anyone who may have information about the suspect to contact authorities and told people to quickly report gunfire or suspicious activity.

Someone fired shots at the museum in Triangle, Va., between 9 p.m. Thursday and 6 a.m. Friday, said Assistant Chief Mike Crosbie of the Prince William County Police Department. He said it appears someone fired from the side of the building facing Interstate 95.

The shooting is the second time someone has fired at the museum. Bullet holes were first found there Oct. 17. Two days later, shots were fired into two windows at the Pentagon.

A third military office — a Marine Corps recruiting station in Chantilly, Va., outside Washington — was shot at late Monday or early Tuesday.

The FBI has said the first three shootings are connected, and investigators say they assume the fourth is connected as well.

Pentagon spokesman Col. Dave Lapan said Friday that security would be even tighter than usual for the Marine Corps Marathon this weekend because of the recent shootings. The Pentagon is a staging ground for Sunday's race.