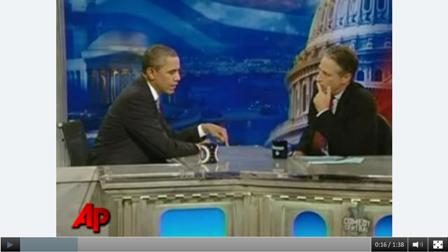 WASHINGTON (AP) — President Barack Obama apparently thinks politics is no laughing matter, even when he's staring down a comedian.

Obama barely cracked any jokes during an appearance Wednesday on "The Daily Show" despite host Jon Stewart's attempts to draw out the president's humorous side with a few of his own snarky wisecracks.
The Skanner News Video here
Less than a week before the critical Nov. 2 congressional elections, Obama said he hopes Democratic lawmakers who made tough votes will be rewarded with another term in office. He promised more accomplishments in the two years left on his own term in the Oval Office and urged people to vote - early if they can.

Stewart asked how the political environment got to the point that Democrats "seem to be running on 'Please, baby, one more chance'" just two years after Obama ran a successful presidential campaign built around "very high rhetoric, hope and change."

"Are you disappointed in how it's gone?" asked the Comedy Central satirist.

Obama seemed to suggest that he wasn't disappointed. He said his advisers had told him during the euphoria of his 2008 election to "enjoy this now because two years from now folks are going to be frustrated. That is, in fact, what's happening."

He listed as reasons a 9.6 percent unemployment rate, sinking housing values and an economy that is growing but not fast enough. But Obama said his administration has also stabilized the economy, noting it has grown for nine months in a row. He also signed major health care and financial legislation. Obama suggested that his administration did so much that "we have done things that some folks don't even know about."

"What have you done that we don't know about?" he asked. "Are you planning a surprise party for us, filled with jobs and health care?"

"Over and over again, we have moved forward an agenda that is making a difference in people's lives each and every day," Obama replied. "Is it enough? No. And so I expect, and I think most Democrats out there expect, that people want to see more progress."

The interview, which allowed Obama to take his campaign message to the type of audience that gets political news from programs like Stewart's, seemed more wonkish than slapstick.

Stewart pressed Obama on the changed political climate in the country and questioned him about the new health care law. The president defended his record as well as Democrats, who are expected to suffer a drubbing at the polls Tuesday. Obama was the guest for the entire show. Stewart is taping the show in Washington this week ahead of a rally he's holding Saturday on the National Mall.

At one point, though, when Obama asked to say something about members of Congress, Stewart prompted laughter by asking, "Are you going to curse?"

Stewart poked at Obama for saying during the presidential campaign that "we are the ones we've been waiting for."

"So here you are, you're two years into your administration and the question that arises in my mind: Are we the people we were waiting for or does it turn out those people are still out there and we don't have their number?" the comedian intoned, suggesting that someone in the White House needs to call them up.

There was even more laughter when Obama used a now-notorious Washington phrase to defend Lawrence Summers, a top economic adviser who is leaving the administration at the end of the year. Stewart reminded Obama that he'd once said that different results won't come from the same people. Then Obama hired Summers, who had served in the Clinton administration.

Obama said Summers "did a heck of a job," to which Stewart said, "You don't want to use that phrase, dude."

That's because in 2005, then-President George W. Bush used the phrase to describe the job his emergency management director, Michael Brown, was doing after Hurricane Katrina's floodwaters had devastated New Orleans.

On the "Daily Show," Obama said he hopes voters will reward some Democrats from largely conservative districts who took votes they knew would be bad politically but did so anyway because they thought it was the right thing to do. He named freshman Rep. Tom Perriello of Virginia, who voted for Obama's health care overhaul and is in a tight race re-election race. Obama plans to campaign with Perriello on Friday.

"My hope is that those people are rewarded for taking those tough votes," Obama said. "If they are, then I think Democrats will do fine on Election Day."