Video: Canadian at Guantanamo Pleads Guilty to All Charges


GUANTANAMO BAY NAVAL BASE, Cuba (AP) — A Canadian accused of killing an American soldier as a teenage al-Qaida militant pleaded guilty Monday as part of a deal that avoids a war crimes trial for someone labeled a "child soldier" by his defenders. 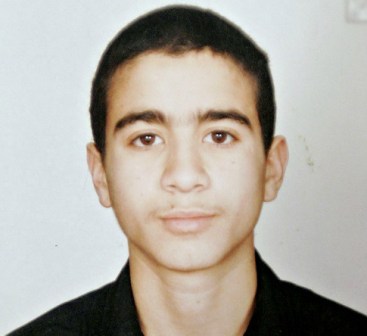 pleaded to five charges including murder for throwing a grenade that mortally wounded the soldier during a fierce raid on an al-Qaida compound in Afghanistan in 2002. The now 24-year-old defendant also admitted to planting improvised explosive devices and receiving weapons training from the terrorist network.
The Skanner News Video here

The exact terms of the plea agreement were not immediately disclosed. Khadr will now face a military jury for a sentencing hearing that is expected to last several days. The panel cannot impose a sentence more severe than the plea agreement. His trial had been scheduled to start Monday and he faced a possible life sentence.

Dressed in a dark suit instead of the solid color jumpsuits typically worn by prisoners held at the U.S. base in Cuba, the defendant, who was born in Toronto and speaks fluent English, repeatedly answered "yes" to a series of questions from the military judge making sure he understood the charges against him.

Khadr, who had previously pleaded not guilty and rejected a plea agreement, stared down at the defense table without making eye contact with the judge. Asked if anyone had made any promises to him so that he would plead guilty, he answered simply "no."

"You should only do this if you truly believe it is in your best interests," the judge told him.

Earlier, his lawyers had said they hoped to secure an agreement because he faced a possible life sentence under a military tribunal system that they believe favors the prosecution despite changes adopted under President Barack Obama.

"There's not much choice," attorney Dennis Edney said. "He either pleads guilty to avoid trial, or he goes to trial, and the trial is an unfair process."

Khadr would be elgible for transfer back to his native Canada after serving the first year of his sentence as part of the agreement, said Army Col. Patrick Parrish, the military judge.

Canada's government issued a terse reaction, noting that he had pleaded guilty.

"This matter is between Mr. Khadr and the US government. We have no further comment," said Catherine Loubier, a spokeswoman for Canadian Foreign Affairs Minister Lawrence Cannon,in an e-mail.

Khadr was charged with murder in the death of U.S. Army Sgt. 1st Class Christopher Speer, a special forces medic from Albuquerque, New Mexico. The U.S. says the Canadian, who was seriously wounded in the firefight, is a war criminal because he was not a legitimate soldier. The prisoner also faced charges of spying, material support for terrorism, conspiracy and attempted murder.

His war crimes trial, the first under Obama, began in August but was put on hold when Khadr's defense lawyer fell ill and collapsed in the courtroom.

The Khadr case has long outraged critics of Guantanamo, including some Obama supporters, who say Khadr should not be prosecuted because he was just 15 at the time of the battle in Afghanistan and was subjected to harsh treatment in custody.

Defenders say he was a child soldier pushed into militancy by his father, an associate of Osama bin Laden who was killed in Pakistan after his son's capture. And they say that killing a soldier during a firefight does not amount to a war crime.

"It's particularly galling that a president who promised to restore human rights is beginning the first trial here with a child soldier who was abused for years in U.S. custody and was taken to a war zone by his dad," said Jennifer Turner, a lawyer for the American Civil Liberties Union who is at the U.S. base in Cuba to observe the proceedings.

The sentencing hearing is likely to feature testimony from witnesses, including Speer's widow, with whom he had two children, and another soldier who was blinded in one eye during the firefight. A jury of military officers will vote on a sentence but officials overseeing the tribunals will reject their decision if it exceeds the terms of the plea bargain.

Attorneys for Khadr and military authorities have declined to provide any details of a plea deal. Several media outlets in Canada, citing anonymous sources, have reported that he would face one more year at Guantanamo and seven back in his native country.

Layne Morris, the now-retired Army sergeant who was partially blinded in the raid, previously said he would oppose that reported sentence as too lenient.

The Guantanamo war crimes trials, the first the U.S. has held since the World War II era, have been stalled repeatedly by legal challenges since they began in 2004.

The U.S. Supreme Court forced Congress and President George W. Bush to modify the rules and Obama did it again as part of his so far unsuccessful attempt to empty the detention center. The military tribunals have convicted just four men, none of them major al-Qaida figures.

The new president's supporters have been frustrated by his inability to close the detention center, where the U.S. now holds about 170 men. Obama had directed the government shortly after his inauguration to close the prison within a year but the effort has bogged down amid Congressional opposition to transferring prisoners to the U.S. and difficulties finding adequate places to resettle them elsewhere.