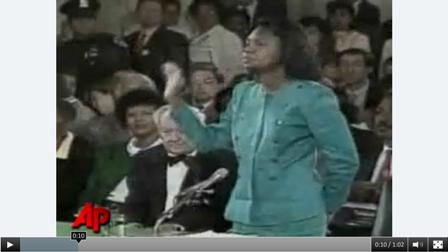 WASHINGTON (AP) -- Anita Hill is refusing to apologize for accusing then-Supreme Court justice nominee Clarence Thomas of sexually harassing her, in an issue that Thomas' wife has reopened 19 years after his confirmation hearings.

"I have no intention of apologizing because I testified truthfully about my experience and I stand by that testimony," Hill, now a Brandeis University professor, said in a statement released Tuesday night.

Thomas' wife, Virginia, had left a voicemail message on Hill's phone on Oct. 9 asking her to say she was sorry for the allegations that surfaced at Thomas' confirmation hearings for a seat on the high court bench in 1991.

In her statement, Hill said, "I certainly thought the call was inappropriate." She had worked for Clarence Thomas in two federal government jobs before he was selected for the court by President George H.W. Bush for the Supreme Court.

Virginia Thomas is a longtime conservative activist and founder of a new nonprofit group, Liberty Central, which opposes what she has characterized as the leftist "tyranny" of the Obama administration and congressional Democrats. She was a keynote speaker earlier this month in Richmond, Va., at a state convention billed as the largest tea party event ever.

Mrs. Thomas said in a statement that she was "extending an olive branch" to Hill.

In a transcript of the message provided by ABC News, which said it listened to the recording, Thomas identified herself and then said, "I just wanted to reach across the airwaves and the years and ask you to consider something. I would love you to consider an apology sometime and some full explanation of why you did what you did with my husband. So give it some thought and certainly pray about this and come to understand why you did what you did. OK, have a good day," Thomas said.

When Hill heard the voicemail, she contacted Brandeis' public safety office, which in turn informed the FBI.

In her statement, Virginia Thomas said she did not intend to offend Hill.

"I did place a call to Ms. Hill at her office extending an olive branch to her after all these years, in hopes that we could ultimately get passed what happened so long ago. That offer still stands, I would be very happy to meet and talk with her if she would be willing to do the same," Thomas said.

Hill declined comment to reporters who stopped her in Waltham on her way to work Wednesday, asking them politely to move.

"I need to get off this street and I don't want anybody to get hurt," she said. "I don't have any comment right now. Please, let me go teach my class."

Andrew Gully, a spokesman for Brandeis, said the school "completely supports" Hill's decision to alert campus security about the call. He said Wednesday was "a routine day" on campus.

FBI Special Agent Jason Pack, a spokesman at bureau headquarters in Washington, declined to comment on the voicemail.

During his Senate confirmation hearings, Clarence Thomas adamantly denied Hill's accusations that he made inappropriate sexual remarks, including references to pornographic movies. Thomas said he did talk about X-rated movies while at Yale Law School, adding that so did many other young people in the 1970s.

The allegations nearly derailed his nomination and sparked a national debate about sexual harassment on the job.

He broke a 16-year silence about the hearings in a 2007 book, "My Grandfather's Son," writing that Hill was a mediocre employee who was used by political opponents to make claims she had been sexually harassed. The justice's wife first suggested Hill apologize in interviews the couple gave after the release of the book.

Hill had worked for Thomas at the Education Department and the Equal Employment Opportunity Commission. She first made her allegations after Thomas had been nominated to the high court, 10 years after she began working for him and only after she was contacted by congressional investigators.