By Geoff Mulvihill and Samantha Henry of the Associated Press
Published: 08 October 2010 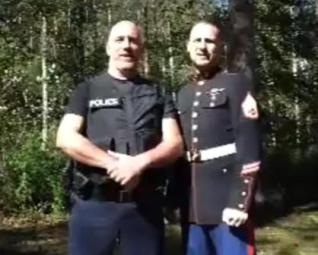 Singer Jason Derulo, Portland's Mayor Sam Adams, Ellen DeGeneres, a longtime police officer and a marine are just a few of the gay and lesbian adults who are speaking out in an effort to reduce suicide rates among gay and lesbian youth. Launched by sex advice columnist Dan Savage, the "It's Get Better" campaign has activists posting videos that tell gay teens they just need to hang on for a while, that they'll live through it.  The Skanner News Video
"Things will get easier; people's minds will change," Ellen DeGeneres pleads in an Internet video, staring into the camera, her voice breaking. "And you should be alive to see it."
Just as the murder of Matthew Shepard galvanized the gay community around hate-crime legislation more than a decade ago, the suicide of a Rutgers University student whose sex life was splashed on the Internet has drawn attention to the widespread bullying and harassment of young gays and lesbians, and the suicides they have caused.
Celebrities and others have seized on Tyler Clementi's shocking suicide to call attention to the issue.
Prosecutors say Clementi's roommate and another student used a webcam to broadcast on the Internet live images of the 18-year-old Rutgers University freshman kissing and spending intimate time with another man. Clementi jumped off the George Washington Bridge three days later. His body was identified Thursday.
"To this poor kid, it's better to be dead than to have people know he's gay," said Jean-Marie Navetta, a spokeswoman for Parents and Friends of Lesbians and Gays. "Therein lies the real tragedy here."
Clementi's death was part of a string of suicides last month involving youngsters who were believed to have been victims of anti-gay bullying. Fifteen-year-old Billy Lucas hanged himself in a barn in Greensburg, Ind. Asher Brown, 13, shot himself in the head in Houston. And 13-year-old Seth Walsh of Tehachapi, Calif., hanged himself from a tree in his backyard.
The outpouring of emotion over Clementi's death recalls the reaction to the killing of Shepard, a gay, 21-year-old student at the University of Wyoming. He was found beaten and tied to a lonely fence post in 1998. Two men were convicted in the slaying. Several states passed hate-crime laws in the aftermath of the crime.
DeGeneres, one of the first Hollywood celebrities to come out of the closet, posted a video this week in response to Clementi's suicide.
"My heart is breaking for their families, their friends and for our society that continues to let this happen," the talk show host says in the video. "These kids needed us. We have an obligation to change this. There are messages everywhere that validate this kind of bullying and taunting and we have to make it stop. We can't let intolerance and ignorance take another kid's life."
Former New Jersey Gov. Jim McGreevey, who left office six years ago after declaring himself "a gay American," called for more understanding for young gay people.
"Even here in New Jersey, where we are blessed with a progressive culture, every child travels this journey by himself or herself," he said. "It can be very painful and very lonely."
Last month, before Clementi's suicide became known, syndicated sex columnist Dan Savage launched the It Gets Better Project, a series of online videos delivered by adult gays and lesbians designed to tell young people that they can survive harassment and have happy lives. The suicide has generated more attention for the project, as well as for a campaign started recently by Parents and Friends of Lesbians and Gays to persuade gay young people to report harassment.
Two New Jersey lawmakers said they would introduce legislation to strengthen the state's anti-bullying law, and another legislator called for stiffer penalties for invasion of privacy.
"We understand that our family's personal tragedy presents important legal issues for the country as well as for us," Clementi's family said in a statement. "Our hope is that our family's personal tragedy will serve as a call for compassion, empathy and human dignity."
Clementi's roommate, Dharun Ravi of Plainsboro, N.J., and another student, Molly Wei of Princeton, N.J., both 18, are charged with invasion of privacy, with the most serious charges carrying up to five years in prison. Prosecutors said they are also looking into the possibility of filing bias charges.
A lawyer for Ravi and one believed to be representing Wei have not returned messages. But friends of both have said that they didn't have a problem with gay people.
On the Rutgers campus, where students have expressed guilt that they didn't know or couldn't help the quiet Clementi, students set up tables with flowers and sheets of paper on which people could leave messages and condolences for Clementi's family.
"To recognize this individual is not only to honor a life that was so needlessly lost, but to silently (or vocally) speak out against the flagrantly intolerant and ignorant mindset that facilitated this tragic event," one message read.
The Rutgers football team plans a moment of silence for Clementi before its game Saturday against Tulane. The university will hold a vigil on Sunday. And the Rutgers Glee club decided during Friday afternoon rehearsal to march down to the memorial and sing the "Rutgers Prayer" a capella in tribute. It is traditionally sung when an important member of the Rutgers community dies or a tragedy happens at the university.
"Everyone is pretty devastated, and frankly, it's embarrassing that something like this would happen here at Rutgers," club member Jonathan Ramteke said.