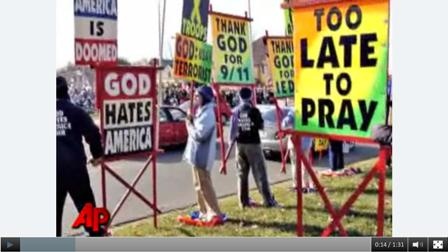 Supreme Court justices on Wednesday pondered the vexing question of whether the father of a dead Marine should win his lawsuit against a fundamentalist church group that picketed his son's funeral.
The complexity and weightiness of the First Amendment issue were palpable in the courtroom as justices heard arguments in the case of Albert Snyder. His son died in Iraq in 2006, and members of the Westboro Baptist Church protested the funeral to make their point that U.S. deaths in Afghanistan and Iraq are punishment for Americans' immorality, including tolerance of homosexuality and abortion.

Justice Ruth Bader Ginsburg said the question is whether the First Amendment must tolerate "exploiting this bereaved family."
There was no clear answer from the court.
Snyder is asking the court to reinstate a $5 million verdict against the Westboro members who held signs outside the funeral of Lance Cpl. Matthew Snyder, including ones that read "Thank God for Dead Soldiers, "You're Going to Hell" and "God Hates the USA." The Marine was killed in a Humvee accident in 2006.
The church also posted a poem on its website that attacked Snyder and his ex-wife for the way they brought up Matthew.
Justice Stephen Breyer said the Internet aspect of the case troubled him because the church was saying something "very obnoxious" about private individuals.
"To what extent can they put that on the Internet?" Breyer asked. "I don't know what the rules ought to be."
The case pits Snyder's right to grieve privately against the church members' right to say what they want, no matter how offensive.
Westboro members, led by the Rev. Fred Phelps, have picketed many military funerals..
They welcome the attention the protests have brought, mocking their critics and vowing not to change their ways whatever the outcome at the Supreme Court.
"No American should ever be required to apologize for following his or her conscience," said Margie Phelps, a daughter of Fred Phelps and the lawyer who argued the case for the church.
Fundamentalist church members turned out in advance of the argument Wednesday morning, to march in front of the court with placards of the type they've been carrying to military funerals. One young boy held up a sign that reads, "God Hates You."
A line of people trying to get into the court stretched around the corner of the majestic building perched atop Capitol Hill.
Snyder won an $11 million verdict against the church for intentional infliction of emotional distress, among other claims. A judge reduced the award to $5 million before the federal appeals court in Richmond, Va., threw out the verdict altogether, citing the church's First Amendment rights.
For Snyder, the case is not about free speech but harassment. "I had one chance to bury my son and it was taken from me," Snyder said.
Forty-eight states, 42 U.S. senators and veterans groups have sided with Snyder, asking the court to shield funerals from the Phelpses'"psychological terrorism."
While distancing themselves from the church's message, media organizations, including The Associated Press, have called on the court to side with the Phelpses because of concerns that a victory for Snyder could erode speech rights.