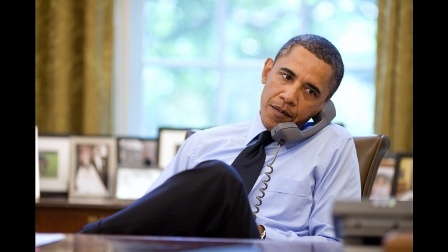 DES MOINES, Iowa – Arguing doggedly against returning Republicans to power, President Barack Obama told Iowa voters Wednesday that the GOP has been dishonest about what needs to be done to revive the economy and restore middle-class dreams.
"We can't pretend that there are shortcuts," the president said, addressing about 70 voters in a grassy backyard.
"When you look at the choice we face in this election coming up," Obama said, "the other side, what it's really offering is the same policies that from 2001 to 2009 put off hard problems and didn't really speak honestly to the American people about how we're gonna get this country on track over the long term."
Five weeks ahead of midterm elections that will determine whether Democrats retain control of Congress, Obama confronted stark voter angst. The first question he got was from a woman who said of her son, a recent college graduate, and his friends: "They are losing their hope which is a message you inspired them with."
Obama responded by citing a list of areas of optimism, ones she could tell her son about it. He said his government is providing more students loans, trying to encourage private job growth, and making tough decisions now that will help the county reclaim its rightful stand as the top leader in innovation and entrepreneurship.
Over the long term, the president assured, "their future will be fine."
Obama spoke to about 70 people at the home of Jeff and Sandy Clubb. It's the second such "backyard discussion" he's holding in as many days as he tries to convince Americans to keep Democrats in power. The president will finish a four-state tour Wednesday afternoon with a meeting with voters in Richmond, Va.
In the Clubb backyard the president had a homey setting, with a birdfeeder and tiki torches visible on the lawn behind him.
But his questioners, while polite, weren't always friendly, underscoring Democrats' challenge in winning votes in a troubled economy.
One man, who described himself as a small business owner manufacturing promotional items like T-shirts and lawn signs, criticized Obama's plans for allowing tax cuts on income over $250,000 a year to expire.
"As the government gets more and more involved in business and more and more involved in taxes, what you're finding is you're strangling those job creation vehicles," the man said.
The president disputed that, saying he's already signed eight pieces of legislation providing small business tax cuts.
Showing some frustration, Obama said: "Your taxes haven't gone up in this administration. Your taxes have gone down in this administration. There's a notion that, well, he's a Democrat so your taxes must have gone up. That's just not true."
"I also have to make sure we're paying our bills" and not leaving debt for future generations, the president said.
A priest in the audience told Obama of a parishioner who lost his job in manufacturing and can't find a new one. The president said that some manufacturing jobs won't come back and the parishioner might need to develop new skills to work in growth sectors like clean energy.
Even in an election season, the president said, he can't always tell people what they want to hear. Moving forward will take "some tough but necessary adjustments," he said.
There is irony in Obama using Iowa as a venue to try to avert a Republican landslide. His victory in the January 2008 Iowa caucus put him on the path to the Democratic presidential nomination, and he carried the state comfortably that November against Republican John McCain.
But almost every state is a battleground in this fall's congressional elections, and Obama is devoting ever more time to campaigning for his party.
A rally he held Tuesday night at the University of Wisconsin came the closest so far to recapturing the enthusiasm of his 2008 drive to the White House. He implored young voters who backed him in 2008 to vote for Democrats this fall.
"Every single one of you is a shareholder in that mission of rebuilding our country and reclaiming our future," he told thousands of students packing the campus's chilly Library Mall.
"We can't let this country fall backwards because the rest of us didn't care enough to fight," he said. "The stakes are too high for our country and for your future."