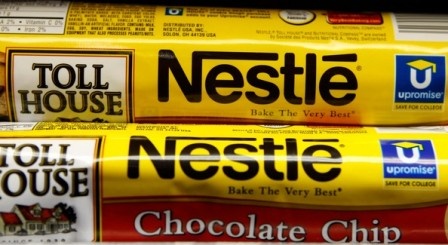 LAUSANNE, Switzerland — Nestle will plow some $500 million into expanding its medical nutrition business over the next decade, in a bid to capture a slice of the growing market for foods to treat chronic conditions such as diabetes and obesity, the Swiss consumer company said Monday.
Nestle SA said it wants to "pioneer a new industry between food and pharma" by creating a medical nutrition institute in Switzerland and a stand-alone subsidiary called Nestle Health Science SA.
The Vevey-based company is already one of the world's biggest producers of processed foods including Nesquik cereal, Haagen-Dazs ice cream and Nespresso coffee, with sales of some $100 billion last year.
The decision to expand its medical nutrition segment is a direct challenge to North Chicago, Illinois-based Abbott Laboratories, which has steadily increased its presence outside the traditional pharmaceutical market.
Peter Brabeck-Letmathe, Nestle's chairman and former chief executive, said health care systems worlwide are struggling to cope with the growing number of people suffering from diabetes, obesity, cardiovascular disease and Alzheimer's.
"Finding efficient and cost-effective ways to prevent and treat acute and chronic diseases" will be the goal of Nestle's research combining food and medical science, he said.
The company already sells products such as Boost — a high-calorie drink for people suffering from malnutrition or weak appetite — to both hospitals and consumers in the United States.
While the focus will initially be on rich countries, where sedentary lifestyles have led to an epidemic of obesity and diabetes, Brabeck pointed to China's growing health care budget as evidence of a worldwide market for nutritional products.
"Obesity is not the privilege of the Europeans or the Americans," he said.
Scientists and health campaigners have argued that special diet products and medicines alone can't solve obesity, which is estimated to affect one billion people worldwide.
"We're still only learning what causes it," said Glenys Jones, a nutritionist at Britain's Medical Research Council. She noted that lack of exercise, overly fatty foods and super-sized portions are part of the problem.
Simply having healthier options sitting on the store shelf next to the full-fat product won't work, she said. "We need to address calories, salt and sugar in all foods."
Regulators such as the U.S. Food and Drug Administration have also been cracking down on claims about the health benefits of consumer products, and Nestle's Brabeck acknowledged the company would likely come under closer scrutiny as it develops medicinal foods.
Still, Chief Executive Paul Bulcke told reporters the new venture was a "promising business opportunity" in a market that could eventually be worth $100-150 billion. Medical nutrition is considered more profitable than the consumer foods business, where margins are traditionally very low because of fierce competition.
Nestle Health Science SA will start operation Jan. 1, 2011, and be run "at arm's length" from the main food and beverages business. The new subsidiary will ingest Nestle's existing medical nutrition business, which had a turnover $1.6 billion last year.
Brabeck said the company will be actively looking for acquisition and licensing opportunities in the field of health and nutrition, but rejected the idea of buying a pharmaceutical company. Nestle is sitting on a sizable war chest following the sale of its stake in eye care company Alcon to Novartis for a net profit of $45 billion.
Last month Nestle purchased British company Vitaflo, which makes foods for people with inherited metabolic disorders.
The new Institute of Health Sciences will be run by Emmanuel E. Baetge, former chief scientific officer of San Diego-based biotech company ViaCyte, and will be based at the Swiss Federal Institute of Technology in Lausanne.
Nestle share rose 0.2 percent to close at 52.80 Swiss francs ($53.73) on the Zurich exchange.