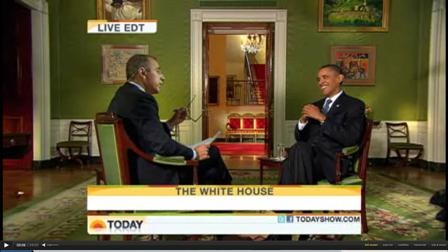 WASHINGTON - President Barack Obama started the school week Monday with a call for a longer school year, and said the worst-performing teachers have "got to go" if they don't improve quickly.
Bemoaning America's decreasing global educational competitiveness, Obama sought in a nationally broadcast interview to reinvigorate his education agenda. At the same time, the president acknowledged that many poor schools don't have the money they need and he defended federal aid for them. But Obama also said that money alone won't fix the problems in public schools, saying higher standards must be set and achieved by students and teachers alike.
Asked in an interview if he supported a year-round school year, Obama said: "The idea of a longer school year, I think, makes sense." He did not specify how long that school year should be but said U.S. students attend classes, on average, about a month less than children in most other advanced countries.
On other topics in a live half-hour television interview, Obama said that White House chief of staff Rahm Emanuel has not told him whether he will resign to run for mayor of Chicago, as is widely expected. Obama said he knows Emanuel must decide quickly to mount a serious campaign.
The president also sought anew to show that he understands the frustration of millions of people coping with a slow economy , and high joblessness , some 20 months into his term. He said that even if people know he is working hard to fix their problems, what they expect from him is "something concrete" to help them get a job and pay their bills.
Obama appeared on NBC's "Today" show in a live interview that focused on education.
Education is primarily the domain of state and local governments. But the federal government has leverage and uses it, for example, through the strings it attaches to poverty aid that thousands of schools depend upon to support their programming.
The president admitted that his own daughters, Malia and Sasha, couldn't get the same quality education at a Washington, D.C. public school that they currently get at their private school. The Obama girls attend Sidwell Friends School, an elite private school in the Washington area.
"The DC public schools systems are struggling," Obama said, though he added that the school district has, "made some important strides over the last several years to move in the direction of reform." Public schools in Washington have long faced criticism for their low test scores and high dropout rates.
Separately Monday, Obama announced a goal of recruiting 10,000 teachers who work in the fields of science, technology, engineering and math , over the next two years. In a statement, Obama said such education is vital to allowing students to compete against their peers in today's economy.
In the interview, the president said he wants to work with teachers unions, and he embraced the role they play in defending their members. But he said that unions cannot and should not defend a status quo in which one-third of children are dropping out. He challenged them not to be resistant to change.
And the president endorsed the firing of teachers who, once given the chance and the training to improve, are still not serving students well.
Associated Press Writer Julie Pace contributed to this story.