By The Skanner News
Published: 24 September 2010 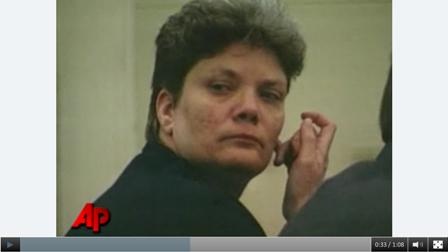 JARRATT, Va. (AP) — Teresa Lewis spent the last days before her execution as she had spent one side of her life — singing hymns and praying. That devotion to Christianity, by her own admission, was countered by outrageous bouts of sex and betrayal.
That dark side led her life to a deadly turn in 2002 when she plied two men with sex and cash to kill her husband and stepson to collect on a $250,000 insurance policy. For that, the 41-year-old on Thursday was the first woman put to death in the U.S. since 2005.
The Skanner News Video here
Lewis died by injection at 9:13 p.m., apologizing first to the sole surviving daughter of the husband she had killed. She was the first woman in Virginia since 1912 put to death. Her supporters and relatives of the victims watched her execution at Greensville Correctional Center in Jarratt.
"She was very peaceful," before she entered the death chamber, said her attorney, James Rocap III.
"We thought that we were supposed to be helping her, while she was actually helping us," he said about the days leading to her death during which she laughed, sang and prayed — for everybody.
Lewis promised the killers a cut of a life insurance policy to shoot her husband, Julian Clifton Lewis Jr., and his son, Charles, as they slept in October 2002. Both triggermen were sentenced to life in prison and one committed suicide in 2006.
Lewis appeared fearful, her jaw clenched, as she was escorted into the death chamber. She glanced tensely around at 14 assembled corrections officials before being bound to a gurney with heavy leather straps.
Moments before her execution, Lewis asked if her husband's daughter — her stepdaughter — was near. She was. Kathy Clifton was in an adjacent witness room blocked from the inmate's view by a two-way mirror.
"I want Kathy to know that I love her and I'm very sorry," Lewis said.
Then, as the drugs flowed into her body, her feet bobbed but she otherwise remained motionless. A guard lightly tapped her on the shoulder reassuringly as she slipped into death.
More than 7,300 appeals to stop the execution had been made to the governor in a state second only to Texas in the number of people it executes.
Texas held the most recent U.S. execution of a woman in 2005. Out of more than 1,200 people put to death since the U.S. Supreme Court reinstated capital punishment in 1976, only 11 have been women.
Lewis, who defense attorneys said was borderline mentally disabled, had inspired other inmates by singing Christian hymns in prison. Her fate also had drawn appeals from the European Union, an indignant rebuke from Iran and the disgust of thousands of people.
The execution stirred an unusual amount of attention because of her gender, claims she lacked the intelligence to mastermind the killings and the post-conviction emergence of defense evidence that one of the triggermen manipulated her. Her spiritual adviser, the Rev. Julie Perry, stood sobbing as she later witnessed the execution, clutching a religious book.
Throughout her life, a faith in God had been a seeming constant for Lewis — whether it was the prayer with her husband hours before he was killed or her ministry behind bars.
But there was another side.
"I was doing drugs, stealing, lying and having several affairs during my marriages," Lewis wrote in a statement that was read at a prison religious service in August. "I went to church every Sunday, Friday and revivals but guess what? I didn't open my Bible at home, only when I was at church."
Her father said she ran off to get married, then later abandoned her children and ran off with her sister's husband. Then she had an affair with her sister's fiance while at the same time having an affair with another man.
Lewis married Julian in 2000 and two years later, his son Charles entered the U.S. Army Reserve. When he was called for active duty he obtained a $250,000 life insurance policy, naming his father the beneficiary and providing temptation for Teresa Lewis.
Both men would have to die for Lewis to receive the payout.
She met at a Walmart with the two men who ultimately killed Julian Lewis and his son. Lewis began an affair with Matthew Shallenberger and later had sex with the other triggerman, Rodney Fuller. She also arranged sex with Fuller and her daughter, who was 16, in a parking lot.
On the night before Halloween in 2002, after she prayed with her husband, Lewis got out of bed, unlocked the door to their mobile home and put the couple's pit bull in a bedroom so the animal wouldn't interfere. Shallenberger and Fuller came in and shot both men several times with the shotguns Lewis had bought for them.