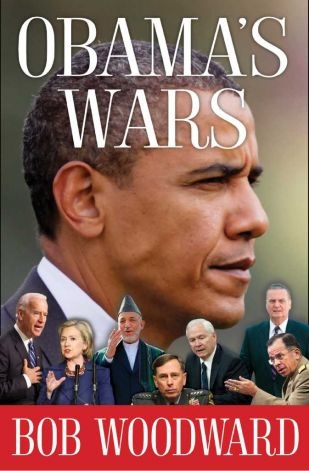 WASHINGTON (AP) — President Barack Obama's top advisers spent much of the past 20 months arguing about policy and turf, according to a new book, with some top members of his national security team doubting the president's strategy in Afghanistan will work.
The book, "Obama's Wars," by journalist Bob Woodward, says Obama aides were deeply divided over the war in Afghanistan even as the president agreed to triple troop levels there. Obama's top White House adviser on Afghanistan and his special envoy for the region are described as believing the strategy will not work.
According to the book, Obama said, "I have two years with the public on this" and pressed advisers for ways to avoid a big escalation in the Afghanistan war.
"I want an exit strategy," he said at one meeting. Privately, he told Vice President Joe Biden to push his alternative strategy opposing a big troop buildup in meetings.
While Obama ultimately rejected the alternative plan, the book says, he set a withdrawal timetable because, "I can't lose the whole Democratic Party."
A White House official said Wednesday that the president is accurately portrayed in the book as an analytical, strategic, and decisive leader. The official said the book doesn't reveal anything new about the U.S. strategy in Afghanistan, nor should it be a surprise that there was vigorous debate within the administration during the development of that strategy.
Lt. Gen. Douglas E. Lute, the president's Afghanistan adviser, is described as believing the president's review of the Afghanistan war did not "add up" to the decision he made. Richard Holbrooke, the president's special representative for Afghanistan and Pakistan, is quoted as saying of the strategy, "It can't work," according to The New York Times, which obtained a copy of the book before its scheduled publication date, scheduled for next week.
Meanwhile, a U.S. official in Washington confirmed Woodward's report that the CIA is running an all-Afghan paramilitary group in Afghanistan that has been hunting Taliban and al-Qaida targets for the agency. A security professional in Kabul familiar with the operation says the 3,000-strong force was set up in 2002 to capture targets for CIA interrogation. Both sources spoke Wednesday on condition of anonymity to discuss matters of intelligence.
Obama was among administration officials that Woodward interviewed for the book. The Washington Post also reported on the book on its website late Tuesday night.
Although the internal divisions described by Woodward have become public, the book suggests that they were even more intense than previously known and offers new details, the Times said.
Biden called Holbrooke "the most egotistical bastard I've ever met," and a number of administration officials expressed scorn for national security adviser James Jones, the Times said.
Adm. Mike Mullen, chairman of the Joint Chiefs of Staff, thought his vice chairman, Gen. James Cartwright, went behind his back, while Cartwright dismissed Mullen because he wasn't a war fighter.
Gen. David Petraeus, who become the Afghanistan commander this summer, told a senior aide that he disliked talking with David Axelrod, the president's senior adviser, because he was "a complete spin doctor."
The book recounts incidents in which Adm. Dennis Blair, then the national intelligence director, fought with Rahm Emanuel, the White House chief of staff, and John Brennan, the counterterrorism adviser.
It also reports that the U.S. has intelligence showing that manic-depression has been diagnosed in Afghan President Hamid Karzai and that he was on medication.
In Kabul, Waheed Omar, Karzai's spokesman, said those allegations were untrue.
"This is a baseless, inflammatory comment that has its roots in a defaming propaganda campaign against President Karzai's personal integrity, leadership and his stances on matters of Afghan national interests," he said Wednesday. "The president is safe and sound. I can confirm that he takes no medication."