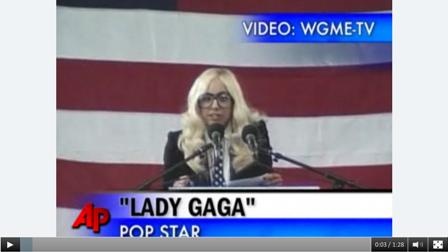 PORTLAND, Maine — Lady Gaga has visited Maine before a key Senate vote to urge the state's two U.S. senators to help repeal the military's "don't ask, don't tell" policy on gays.
More than 2,000 people attended a rally Monday at Portland's Deering Oaks Park, where the pop star railed against the 1993 policy prohibiting service members from revealing if they're gay.
The Skanner News Video here
Lady Gaga says the policy allows straight soldiers who harbor hatred toward gays to fight for their country. She suggests a new policy: "If you don't like it, go home."
The rally was organized by Servicemembers Legal Defense Network. The organization is trying to pressure Republican Sens. Olympia Snowe and Susan Collins of Maine and Scott Brown of Massachusetts to vote to allow a repeal of the policy.
The Senate is scheduled to consider the matter Tuesday.
THIS IS A BREAKING NEWS UPDATE. Check back soon for further information. AP's earlier story is below.
PORTLAND, Maine (AP) — Lady Gaga wants Maine's Republican senators to cast votes this week to help repeal the military's "don't ask, don't tell" policy on gays.
The Grammy Award-winning pop singer will attend a rally organized by Servicemembers Legal Defense Network on Monday in Deering Oaks Park, near the University of Southern Maine's Portland campus.
Lady Gaga is expected to stand alongside veterans who were discharged because of the policy, which prohibits service members from revealing if they're gay, the group said. The policy also bars military recruiters from asking about people's sexual orientations.
A proposal to repeal the "don't ask, don't tell" policy is attached to the defense authorization bill, which Democrats will try to bring to a vote this week.
Democrats need 60 votes on Tuesday to cut off debate and proceed to the bill, again putting Republican Sens. Olympia Snowe and Susan Collins of Maine in the role of casting what could be deciding votes in the Senate, said Trevor Thomas, spokesman for Servicemembers Legal Defense Network.
"We need the support of Collins and Snowe and the best way to get it is to be able to be in their backyard," Thomas told The Associated Press.
Collins previously voted for a provision to repeal the "don't ask" policy in the Armed Services Committee, but she wants "a full and open debate" on the defense authorization bill as well as the ability for Republicans to offer amendments, said her spokesman, Kevin Kelley.
Snowe has not decided how she'll vote on Tuesday, a spokesman said Monday.
Lady Gaga recently called on Senate Majority Leader Harry Reid to repeal the policy during an interview with talk show host Ellen DeGeneres. Gaga is known for her wacky wardrobe and catchy hits, including "Bad Romance," "Paparazzi" and "Poker Face."