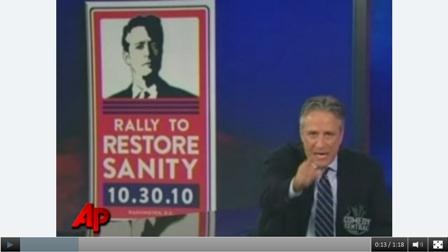 WASHINGTON — "The Daily Show" host Jon Stewart is hosting a "million moderate march" in Washington — for people who think shouting is annoying — but faux political nemesis Stephen Colbert will be nearby to keep fear alive against those "dark, optimistic forces."
Colbert, host of Comedy Central's "The Colbert Report," and his arch enemy on the network plan to hold opposing political rallies on the National Mall just before the November elections.
Stewart interrupted his regular fake newscast Thursday night to announce a "Rally to Restore Sanity" on Oct. 30. He said it's for people too busy with their normal lives to go to other political rallies.
The Skanner News Video here
"We're looking for people who think shouting is annoying ... who feel that the loudest voices shouldn't be the only ones that get heard," Stewart writes in promotion for his rally. "Think of our event as Woodstock, but with the nudity and drugs replaced by respectful disagreement."
No Adolf Hitler mustaches allowed at the Stewart rally — unless it's drawn on a photo of the German dictator (or Charlie Chaplin).
Nearby, Colbert also announced a "March to Keep Fear Alive" to restore "truthiness" to the nation on his show Thursday night. For those who don't know, truthiness was a 2006 word of the year that means "truth that comes from the gut, not books."
Colbert is encouraging "all freedom-loving patriots" to bring an overnight bag and five extra sets of underwear to challenge Stewart's "dark, optimistic forces." He said the nation can't afford a rally to restore sanity in the middle of a recession.
He wrote the United States is built on three bedrock principles: freedom, liberty and fear.
"They want to replace our fear with reason," he wrote. "But never forget 'reason' is just one letter away from 'treason.'"
The events come a few weeks after Glenn Beck's recent rally on the anniversary of Martin Luther King Jr.'s March on Washington. Stewart's website notes Oct. 30 was chosen as a date "of no significance whatsoever."
The rallies take aim at extremists from the political fringes. Stewart said it will give voice to about 70 to 80 percent of Americans who aren't heard in daily political discourse.
Stewart and Colbert have filed a single application for a permit to host 25,000 people on the Washington Monument grounds, National Park Service spokesman Bill Line said Friday. It hasn't been approved yet.
Stewart said Thursday night that his rally would be a "million moderate march." He suggested a few signs for the rally, including "I disagree with you, but I'm pretty sure you're not Hitler."
"You may be asking yourself ... 'but am I the right person to go to this rally?'" Stewart said on his show. "The fact that you would even stop to ask yourself that question as opposed to just jumping up, grabbing the nearest stack of burnable holy books, strapping on a diaper and pointing your car towards D.C. — that means I think you just might be right for it."
___
Online:
Rally to Restore Sanity