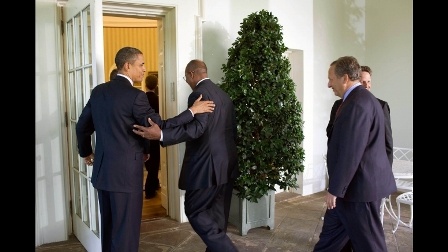 
WASHINGTON (AP) -- Here's some pressure for lawmakers: If they don't reach agreement on extending soon-to-expire Bush-era tax cuts, nearly all their constituents back home will get big tax increases.
A typical family of four with a household income of $50,000 a year would have to pay $2,900 more in taxes in 2011, according to a new analysis by Deloitte Tax LLP, a tax consulting firm. The same family making $100,000 a year would see its taxes rise by $4,500.
Wealthier families face even bigger tax hikes. A family of four making $500,000 a year would pay $10,800 more in taxes. The same family making $1 million a year would get a tax increase of $52,300.
The estimates are based on total household income, including wages, capital gains and qualified dividends. The estimated tax bills take into account typical deductions at each income level.
Democrats have been arguing for much of the past decade that tax cuts enacted in 2001 and 2003 under former President George W. Bush provided a windfall for the wealthy. That's true, but they also reduced taxes for the working poor, the middle class, and just about everyone in between.
Those tax cuts expire at the end of the year, setting the stage for a high-stakes debate just before congressional elections in November. If Congress fails to act, families at every income level will see more taxes being withheld from their paychecks come January.
The tax cuts enacted in 2001 and 2003 reduced marginal income tax rates at every level. They also provided a wide range of income tax breaks for education, families with children and married couples.
Taxes on capital gains and dividends were reduced, while the federal estate tax was gradually repealed, though only for this year.
President Barack Obama wants to extend the tax cuts for individuals making more than $200,000 and joint filers making more than $250,000 in adjusted gross income. That's income from wages, capital gains and dividends, before standard deductions and exemptions are subtracted.
Republicans and a growing number of Democrats in Congress want to extend all the tax cuts, at least temporarily.
On Thursday, House Republican Leader John Boehner of Ohio said he wants an up-or-down vote on extending all the tax cuts before congressional elections in November.
``Raising taxes on anyone, especially small businesses, is the wrong thing to do in a struggling economy,'' Boehner said. ``On the issue of job killing tax hikes the American people are not going to accept anything less than the vote that they deserve.''
House Speaker Nancy Pelosi, D-Calif., wouldn't commit to vote on any tax proposals before the election. She did, however, pledge to address them by the end of the year.
``The only thing I can tell you is that the tax cuts for the middle class will be extended this Congress,'' Pelosi told reporters Thursday.
More than half the country backs raising taxes on the richest Americans, according to a new Associated Press-GfK Poll. The survey showed that by 54 percent to 44 percent, most people support raising taxes on the highest earners.
In a breakdown of the numbers, 39 percent agree with Obama, while 15 percent favor raising taxes on everyone by allowing the cuts to expire at year's end. Still, 44 percent say the existing tax cuts should remain in place for everyone, including the wealthy.
While Obama's plan would spare about 97 percent of tax filers, it would mean big tax increases for the wealthy.
Under Obama's plan, a family of four making $325,000 a year would get a tax increase of $5,400, while the same family making $1 million a year would get a tax increase of $56,300, according to the analysis by Deloitte Tax.
A family of four making $5 million a year would get a tax increase of $325,600.
Pelosi said the nation cannot afford to extend tax cuts for top earners.
``I see no justification for going into debt to foreign countries to underwrite and subsidize tax cuts for the wealthiest people in America,'' Pelosi said.