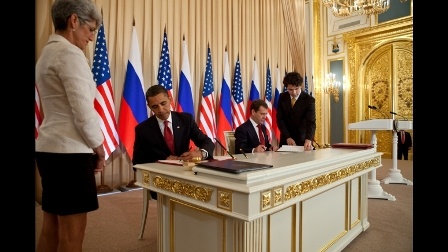 WASHINGTON (AP) -- A U.S. Senate panel endorsed a major arms control treaty with Russia on Thursday to advance one of President Barack Obama's top foreign policy goals.
The Senate Foreign Relations Committee approved the New START treaty in a 14-4 vote. Three Republicans voted with Democrats, an indication that Obama may get the votes needed for final passage. It remained unclear whether the full Senate will consider the treaty this year.
Obama and Russian President Dmitry Medvedev signed the treaty in April. It would shrink the limit on strategic warheads to 1,550 for each country, down about a third from the current ceiling of 2,200. It also would implement changes in current procedures that allow both countries to inspect each other's arsenals and verify compliance.
In a statement after the vote, Obama urged the Senate to move quickly to ratification.
``I encourage members on both sides of the aisle to give this agreement the fair hearing and bipartisan support that it deserves, and that has been given to past agreements of its kind,'' he said.
Democrats had delayed a committee vote on the treaty as they sought broader support from Republicans. They will need at least eight Republican votes on the Senate floor to have the two-thirds majority needed for ratification.
Some Republicans say the pact does not establish adequate procedures for ensuring that Russia abides by its terms. They also fear that Moscow could use the treaty to limit U.S. missile defense plans. Some Republicans also are tying their support to assurances that Democrats will provide more money to maintain and improve existing nuclear warheads.
The treaty's prospects received a boost this week when a Republican on the Foreign Relations Committee, Sen. Bob Corker, endorsed an amendment from the committee's senior Republican, Sen. Richard Lugar, aimed at overcoming his party's reticence on the treaty. Thursday, Republican Sen. Johnny Isakson joined Corker and Lugar to vote in favor of the treaty in the committee.
Some Republicans remained unconvinced, however, and Tuesday's debate became heated at times. Republican Sen. Jim DeMint, citing the missile defense concerns, said the treaty would undermine U.S. security.
``If we are going to move ahead with the commitment not to protect the people of the United States, I think everyone in this country ought to know it,'' DeMint said.
That provoked the ire of committee chairman, John Kerry, and other Democrats, who said that all the lawmakers were committed to protecting the American people.
Kerry and DeMint later compromised on an amendment describing the U.S. commitment to missile defense.
Democrats say the treaty could be considered by the full Senate before the November congressional election. But given the intense partisan atmosphere in Washington in the run-up to the vote, Democratic prospects may be better in a ``lame-duck'' session that would sit after the elections but before the new Congress is seated. Passage could be more difficult under a new Congress because Republicans are expected to pick up seats in the election.
After the vote, Kerry discounted the possibility that the vote on ratification will take place before the election and said there is a much better chance during the lame duck session.
The administration has held the treaty up as a sign that its efforts to improve relations with Russia have borne fruit. A failure to ratify the treaty or a long delay would represent a significant foreign policy setback.