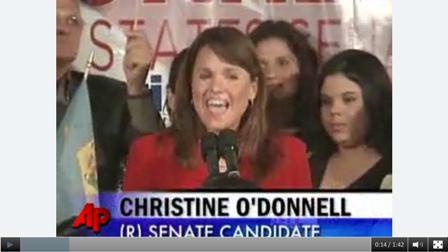 WASHINGTON — Virtually unknown a month ago, Christine O'Donnell rode a surge of support from tea party activists to victory in Delaware's Republican Senate primary Tuesday night, dealing yet another setback to the GOP establishment in a campaign season full of them. A second insurgent trailed narrowly in a long, late count for the GOP nomination in New Hampshire.
The Skanner News Video here
O'Donnell defeated nine-term Rep. Mike Castle, a fixture in Delaware politics for a generation and a political moderate. Republican Party officials, who had touted him as their only hope for winning the seat in the fall, made clear as the votes were being counted they would not provide O'Donnell funding in the general election campaign.
She enters the fall race as an underdog to Chris Coons, a county executive who was unopposed for the Democratic nomination. The Republican state chairman, Tom Ross, said recently she "could not be elected dogcatcher," and records surfaced during the campaign showing that the IRS had once slapped a lien against her and her house had been headed for foreclosure. She also claimed falsely to have carried two of the state's counties in a race against Vice President Joe Biden two years ago.
With unemployment high and President Barack Obama's popularity below 50 percent, Republicans said a run of hotly contested primaries this spring and summer reflected voter enthusiasm that will serve the party well in the fall. The GOP needs to win 40 seats to take the House and 10 for control of the Senate.
Democrats countered that the presence of tea party-supported Republicans on the ballot on Nov. 2 would prove costly to the GOP. That proposition will be tested in seven weeks' time in Senate races in Nevada, Colorado, Florida, Kentucky — all states where establishment Republican candidates fell in earlier primaries — and now Delaware.
In the other marquee race of the night, for New Hampshire's Republican Senate nomination, lawyer Ovide Lamontagne raced to an early lead, then fell behind former Attorney General Kelly Ayotte by a few hundred votes with ballots counted in slightly more than half the state's precincts.