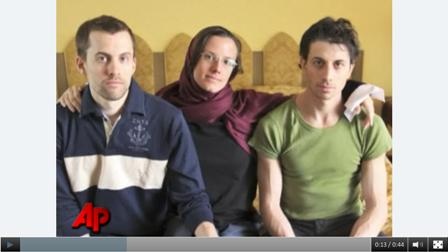 TEHRAN, Iran — Iran freed an American woman on $500,000 bail Tuesday, more than a year after she was detained along the border with Iraq. However, authorities said they were not considering the immediate release of the two companions arrested with her.
The release of 32-year-old Sarah Shourd followed days of conflicting statements by Iranian authorities on whether she would be let go. The decision got mired in internal political feuds among Iran's leadership and questions over whether the family could raise the bail money and if it did, would the payment violate sanctions against Iran.

Shourd's lawyer said she would travel first to the Gulf state of Oman — about a two-hour flight from Iran -- where her mother already was waiting for her. She was expected to leave on Tuesday.
Shortly after Iranian state media announced Shourd's release, the country's hardline judiciary said the "pretrial detention" of her two American companions — Shane Bauer and Josh Fattal, pictured with her above — had been extended for two more months. Shourd and Bauer are engaged to be married. Iran has charged all three with spying, allegations their families and the U.S. government have dismissed as a fabrication.
Iranian President Mahmoud Ahmadinejad has said Shourd was being released on compassionate grounds because of health reasons. Her mother says she has serious medical problems, including a breast lump and precancerous cervical cells.
Tehran's chief prosecutor Abbas Jafari Dowlatabadi said bail had been paid to Iran's Bank Melli in Muscat, Oman but it was not immediately clear who paid it.
"The judge issued the release order and Ms. Shourd was simply set free and she can leave Iran if she wants to," he told state-run English-language Press TV. He said the cases of the two American men, both 28, will be sent to the revolutionary court and "there is no talk of releasing those two right now."
Iran indicted the three Americans on spy-related charges on Sunday and the prosecutor's statement suggested the men would face trials while proceedings against Shourd could be held in absentia.
Shourd's lawyer, Masoud Shafiei, said she had been released but was still undergoing formalities inside the Evin Prison, where she has been held in solitary confinement. He said he had no information about her departure route or any details about bail.
A spokesman for the Swiss Foreign Ministry, Lars Knuchel said the release had not been formally confirmed but added: "We are very confident that things are moving into the right direction."
The U.S. broke off ties with Iran after the 1979 Islamic Revolution, and Switzerland handles U.S. interests in Iran.
Shourd, who grew up in Los Angeles, Bauer, who grew up in Onamia, Minn., and Fattal, who grew up in Elkins Park, Pa., were detained along the Iran-Iraq border on July 31, 2009 and accused of illegally crossing the border and spying in a case that has deepened tensions with Washington. Their families say they were hiking in Iraq's scenic north, and that if they crossed the border, they did so unwittingly.
The stage was set for Shourd's release last week when Ahmadinejad said he intervened as a gesture of Islamic compassion at the end of the holy month of Ramadan. However, the judiciary quickly upstaged the president by saying it was in charge of the case and would set the rules — in the form of the largest known bail for any high-profile Westerner jailed in the past year.
Shortly after judicial officials announced the bail on Sunday, Shourd's lawyer predicted she could walk free in "two or three days."
Moves to release Shourd have been accompanied by political jockeying in Iran between Ahmadinejad and his more conservative rivals.
Shourd's mother's voicemail was full when The Associated Press tried to reach her for comment. A New York publicist working with the families, Samantha Topping, said she did not have any details about Shourd's travel plans, but would release a statement later on Tuesday. A message on the cell phone of Cindy Hickey, mother of Shane Bauer, referred calls to Topping.
On Monday, Shourd's family asked the Iranians to drop or lower the demanded sum because they were having difficulty raising the money.
U.S. sanctions put blanket restrictions on transactions with Iran's main state bank, Bank Melli, which has also been the channel for past bail payments to Iranian courts by foreign detainees. Washington accuses the bank of helping fund Iran's ballistic missile development and its nuclear program, which the U.S. says could eventually lead to atomic weapons. Iran says it only seeks peaceful nuclear reactors for energy.
U.N. sanctions also call on governments to block transactions with Melli and another major Iranian financial institution, Bank Saderat, if there are "reasonable grounds" they could contribute to Iran's nuclear activities.
Associated Press Writer Gretchen Ehlke in Milwaukee contributed to this report.