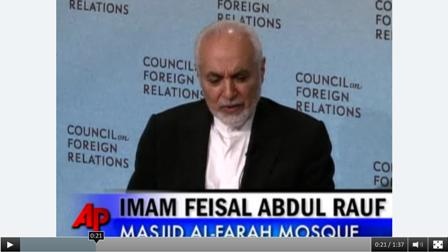 NEW YORK — The imam leading the effort to build an Islamic center and mosque near the World Trade Center site said Monday that a resolution to the raging debate over its location is being examined.
"We are exploring all options as we speak right now, and we are working to what will be a solution, God willing, that will resolve this crisis, defuse it and not create any unforeseen or untoward circumstances that we do not want to see happen," Imam Feisal Abdul Rauf said during a question-and-answer session following a speech before the Council on Foreign Relations.
The Skanner News Video here
He did not elaborate on whether the options included moving the center from a site two blocks from ground zero.
But in response to a later question, Rauf said the proposed location, while controversial, was important.
"We need a platform where the voice of moderate Muslims can be amplified. ... This is an opportunity that we must capitalize on so the voice of moderate Muslims will have a megaphone," he said.
The imam said he wanted to clarify a "misperception" that the Islamic center's proposed site was sacred ground.
"It is absolutely disingenuous as some have suggested that the block is hallowed ground," he said, noting its proximity to strip joints and betting parlors.
During his remarks, Rauf raised the question of whether the project was worth the controversy.
"The answer is a categorical yes," he said. "Why? Because this center will be a place for all faiths to come together in mutual respect."
He noted: "The world will be watching what we do here."
He also decried some aspects of the debate surrounding the proposal.
"Let us therefore reject those who would use this crisis ... for political gain or even for fame," he said.
Critics of the proposal say putting a mosque so close to where Islamic extremists brought down the World Trade Center in 2001 shows disrespect for the dead. Supporters cite religious freedom.