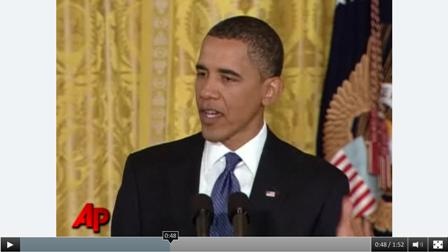 ASHINGTON (AP) — President Barack Obama insisted Friday that the U.S. economy is showing improvement from the deepest recession in decades but conceded the "progress has been painfully slow." He said he understands that many voters in November's elections may blame the weak recovery on him.
"For all the progress we've made, we're not there yet. And that means people are frustrated and why people are angry," he said at the White House in his first formal news conference since May. "Because I am president, and the Democrats have control the House and Senate, it's understandable that people are saying, 'What have you done?'"
The Skanner News Video here
Obama repeated his insistence that Republicans drop stalling tactics on a bill to help small businesses when Congress returns next week from its summer recess.
Facing the possibility of a GOP blowout in November, Obama insisted again that Bush-era tax cuts be extended for individuals earning over $200,000 a year and joint filers earning over $250,000. All the tax cuts are due to expire at the end of this year unless Congress acts.
Obama said Congress shouldn't delay extending the middle-class tax cuts any longer.
"Why hold it up? Why hold the middle class hostage," he said.
He said extending tax cuts for the wealthiest Americans "is a bad idea."
Obama over the past week has outlined a trio of job-creation ideas designed to prod the economy: $50 billion for roads, rail lines and other infrastructure spending, a permanent research and development credit and upfront 100 percent business write-offs through 2012.
With polls suggesting that voters have decided — rightly or wrongly — that his $814 billion stimulus plan last year was less than a success, the White House has been steering clear of portraying these new items as another stimulus.
Yet when he was asked directly whether the unpopularity of the first stimulus was why White House officials weren't using that word this time, Obama said:
"I have no problem with people saying the president is trying to stimulate growth and jobs. There's no doubt that everything we've been trying to do ... is designed to stimulate growth and jobs in the entire economy." He said he hoped Republicans had the same goal.
Seeking to rally his struggling party, Obama cast Democrats as warriors for the hard-pressed middle class and Republicans as protectors of millionaires and special interests.
Asked how he had changed Washington, Obama said the dreadful economy made it hard to demonstrate real progress.
"I think that's fair. I'm as frustrated as anybody by it," Obama said.