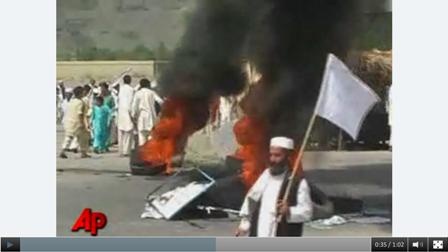 NEW YORK (AP) — In the past, the anniversary of the Sept. 11, 2001, terrorist attacks was marked by somber reflection and a call to unity, devoid of politics. No more.
This year's commemoration of the attacks that killed nearly 3,000 people in New York, Washington and Shanksville, Pa., promises to be the most political and contentious ever, because of a proposed Islamic center and mosque near ground zero, and a Florida pastor's plan to burn the Quran — and the debate those issues have engendered over religious freedom.
The Skanner News Video here
As in other years, official ceremonies are planned at the three locations the terrorists struck. President Barack Obama will attend a commemoration at the Pentagon, while Vice President Joe Biden will attend the ceremony at ground zero. First lady Michelle Obama and former first lady Laura Bush will travel to Shanksville to observe the anniversary there.
Vice President Joe Biden will attend the largest of the three — the New York ceremony at a park near ground zero, where 2,752 people were killed when Muslim extremists flew planes into the twin towers of the World Trade Center. The ceremony there will pause four times: twice to mark the times each plane hit the towers, and twice to observe the times the towers fell. Houses of worship in the city have been asked to toll their bells at 8:46 a.m., when the first plane struck the north tower.
But this time, along with the formal ceremonies, activists for and against the proposed Islamic center are planning their own events to capture the emotion of the day for political purposes.
Terry Jones, the pastor of a small, independent church in Gainesville, Fla., shot to international notoriety by threatening to mark 9/11 by burning copies of the Quran — a plan he canceled under pressure from the White House but now says he's reconsidering.
In Afghanistan, at least 11 people were injured Friday in scattered protests over Jones' plan. Only a few thousand people attended those rallies and no large-scale demonstrations were reported elsewhere. In Indonesia, the world's most populous Muslim country, cleric Rusli Hasbi told 1,000 worshippers at Friday prayers that whether or not he burns the Quran, Jones had already "hurt the heart of the Muslim world."
Also on Saturday, former Republican vice presidential candidate Sarah Palin was expected to observe the anniversary in Alaska with Fox News TV host Glenn Beck. The two conservative celebrities hosted a Tea Party rally last month at the Lincoln Memorial.
Nowhere do emotions run higher than in New York, where the proposed Islamic center just two blocks ground zero has inflamed the planned commemoration.
Activists are organizing a pair of dueling rallies — one against the planned Islamic center, one supporting it — to follow New York's official ceremony at a park southeast of the trade center site.
The anti-mosque rally has bitterly divided family members of those who died in the attacks, with some planning to attend the rally and speak, while others denounce it as unnecessary and wrong.
Sally Regenhard, who lost her firefighter son, Christian Regenhard, in the attacks, said she would attend the city ceremony in the morning where the names of the dead are read aloud, as she has done each year since the attacks. Then, she planned to head over to the anti-mosque rally.
"The purpose is to speak out and express our feelings that this mosque, the location of it, is a grievous offense to the sensitivity of 9/11 families," Regenhard said. "There's nothing political about people who want to speak out against something they think is so wrong, so hurtful and so devastating."
But Donna Marsh O'Connor, whose pregnant daughter, Vanessa, was killed in the attacks, supports the mosque. She said she strongly opposes the planned rally and the political motivations behind it.
"It's more of the same hate mongering and fear mongering that's been going on for years," O'Connor said. "People have a right to free speech. But if they're talking about sensitivities to 9/11 families, why are they rallying and doing events on a day we should spend thinking about those we lost?
The rally is being hosted by Pamela Geller, a conservative blogger who has actively opposed the planned Islamic center since the project's inception.
John Bolton, who served as U.S. ambassador to the United Nations under President George W. Bush, was expected to send a videotaped message of support to the rally, as was conservative journalist Andrew Breitbart. Geert Wilders, a Dutch politician who advocates banning the Quran and taxing Muslim women who wear head scarves, planned to address the crowd in person, as well as a handful of Republican congressional candidates who have made opposition to the mosque a centerpiece of their campaigns.
In an interview with The Associated Press, Geller said the rally would be "respectful" and was not intended to provoke violence or other inappropriate behavior on what has typically been a somber, mournful anniversary.
"It's a rally of remembrance for tens of thousands who lost loved ones that day," Geller said. "It's not a political event, it's a human rights event."
New York Police Commissioner Raymond Kelly told reporters this week his department was prepared for the rally and had already deployed additional security at the mosque site two blocks north of ground zero since it's been the target of protests already.
But, Kelly said, police weren't anticipating major problems.
"We have no reason to anticipate violence at these demonstrations. ... There is no indication, no intelligence that would indicate violence occurring," Kelly said.
___
Contributing to this report were Associated Press writers Tom Hays and Colleen Long in New York, Ayi Jufridar in Lhokseumawe, Indonesia; Robert Reid in Kabul; Anne Flaherty and Lolita C. Baldor in Washington; and AP Legal Affairs Writer Curt Anderson in Miami.