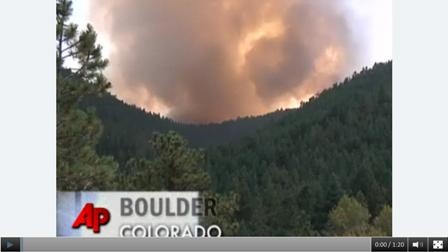 BOULDER, Colo. – Four residents of an area burned by a wildfire near Boulder remain missing.
Authorities said earlier Wednesday that eight people were unaccounted for. Since then, one more person was reported missing and a total of five have been located.
Some residents have refused to leave the area and stayed behind, risking their lives to try to save their homes. Authorities have been following up with family members and checking homes in the area to find the missing.
The Skanner News Video here
The fire is burning on 6,388 acres, just under 10 square miles. Some rain began to fall on the area Wednesday, providing a boost to firefighting effort.
Crews attacked the blaze from the air and on the ground but officials say they still don't have control of the fire.
THIS IS A BREAKING NEWS UPDATE. Check back soon for further information. AP's earlier story is below.
BOULDER, Colo. (AP) — Firefighters encountered a tangle of rattlesnakes, downed power lines and combustible propane tanks Wednesday as authorities looked for eight people missing in a wildfire that has destroyed more than a hundred homes.
Some residents have refused to leave the area and stayed behind, risking their lives to try to save their homes. Authorities are following up with family members and checking homes in the area to find the missing.
About 3,500 people have been evacuated from about 1,000 homes since the 6,168-acre fire broke out in a parched area north of Boulder on Monday.
It's unclear whether the eight people unaccounted for were linked to some of the 168 homes that have been reported destroyed so far.
At the Colorado Mountain Ranch, 60-year-old Mike Walker has been making a stand against the fire with his wife and 25-year-old daughter in a desperate effort to save the children's summer camp and outdoor recreation center they operate.
"He's safe, he's up there," said Walker's 19-year-old daughter Rose, who evacuated. "He just won't leave. We never doubted where he was, he just won't leave for anybody."
Rose Walker said her father, mother and sister are trying everything to save their ranch, with her father using a tractor to scoop up flames away from structures, "literally dragging the fire away from the buildings." On Wednesday, Rose Walker said her family were still at their ranch, using rakes and backpacks filled with water and a hose to put out any hot spots.
The large plume of smoke the fire had been producing since it started Monday has dissipated, indicating that the burning was less extreme Wednesday thanks to relatively higher humidity and cooler temperatures, said Steve Segin of the Rocky Mountain Area Coordinating Center, which manages firefighting equipment and crews. He said that allows firefighters to be more pro-active and focus on building lines to contain the fire.
"Crews still have a lot of work to do," he said.
Fire conditions were expected to worsen Thursday night into Friday and the risk of any new fires quickly spreading was high along the populated Front Range region, according to the National Weather Service.
Seven of the country's 19 heavy air tankers have been sent to Colorado to fight the blaze, considered the nation's top firefighting priority. Two more have been dispatched to the fire, said Ken Frederick, spokesman for the National Interagency Fire Center in Boise, Idaho.
Sheriff's Cmdr. Rich Brough said investigators are still trying to determine the cause and origin of the fire.
Families like the Walkers have been carrying out their own fight against the fire.
Firefighters have been supplying them with water when they can and Rose Walker said she's been crossing into the fire zone to bring her family food and supplies, although authorities have been reluctant to let her come up to the ranch.
Despite her family's efforts, 35 structures have burned, including the family's home, sheds, barns and work areas, Rose Walker said. It's not clear if those are among the 92 total structures — from sheds to homes — that authorities have already confirmed have burned.
"It's everything to us. It's home, it's our work, it's our life," Rose Walker said.
She said family friends have started a Facebook page for the family, to encourage people to make donations to help with supplies, food and help replace the tools her father has lost in the fire.
Brough said authorities don't have the time or manpower to force people to leave. However, he said that if a missing person is linked to a burned home, authorities will have to go to the home to see if there are any human remains, tying up resources.
"People are going through trying times right now. We don't have the resources to go up and arrest everybody that's not leaving the area," Brough said.
Meanwhile, those who abided by the evacuation order were frustrated that they couldn't do more to help.
William Bradshaw has grown restless watching the smoke plume over Boulder as he stays in a shelter at the YMCA.
"I don't know if my house has burnt to the ground but not just my house, but all the precious things that I have accumulated in my lifetime," said Bradshaw.
The belongings left behind include the ashes and fingerprints of his son who died at 16.
Resident Dan Hackett prepared to hike two miles from a roadblock to check on the condition of his home. He hiked in once before and found it was still standing. A house 200 feet away was lost and foundations and metal fixtures like sinks was all that remained of houses in some spots, he said.
The fire center also dispatched hot-shot crews to Colorado — teams which Frederick called the "Marine Corps of firefighters."
"If there's any good news, it's that we're at the tail end of the fire season nationally and there's a good availability of resources," Frederick said.
___
Associated Press writer Ivan Moreno contributed to this report.