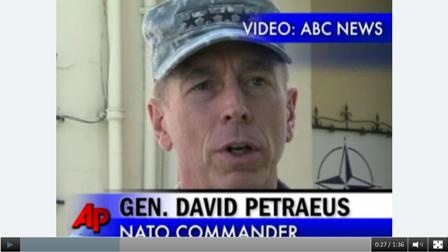 KABUL, Afghanistan – The top U.S. and NATO commander in Afghanistan warned Tuesday an American church's threat to burn copies of the Muslim holy book could endanger U.S. troops in the country and Americans worldwide.
Meanwhile, NATO reported the death of an American service member in an insurgent attack in southern Afghanistan on Tuesday.

The comments from Gen. David Petraeus followed a protest Monday by hundreds of Afghans over the plans by Gainesville, Fla.-based Dove World Outreach Center — a small, evangelical Christian church that espouses anti-Islam philosophy — to burn copies of the Quran on church grounds to mark the Sept. 11, 2001, terrorist attacks on the United States that provoked the Afghan war.
"Images of the burning of a Quran would undoubtedly be used by extremists in Afghanistan — and around the world — to inflame public opinion and incite violence," Petraeus said in an e-mail to The Associated Press.
NATO Secretary-General Anders Fogh Rasmussen echoed those sentiments Tuesday, saying any burning "would be in a strong contradiction with the all the values we stand for and fight for."
Muslims consider the Quran to be the word of God and insist it be treated with the utmost respect, along with any printed material containing its verses or the name of Allah or the Prophet Muhammad. Any intentional damage or show of disrespect to the Quran is deeply offensive.
In 2005, 15 people died and scores were wounded in riots in Afghanistan sparked by a story in Newsweek magazine alleging interrogators at the U.S. detention center in Guantanamo Bay placed copies of the Quran in washrooms and flushed one down the toilet to get inmates to talk. Newsweek later retracted the story.
Responding to Petraeus' comments, Dove World Outreach Center's senior pastor Terry Jones acknowledged Petraeus' concerns as legitimate but said the church still planned to go ahead with the burning.
"We are at this time not going to cancel it. We're still considering it and praying about it," Jones told The Associated Press. "We are also just also concerned and wondering, when do we stop? How much do we back down? ... Instead of us backing down, maybe it's to time to stand up."
The church, which made headlines last year after distributing T-shirts that said "Islam is of the Devil," has been denied a permit to set a bonfire but has vowed to proceed with the burning. The congregation's website estimates it has about 50 members, but the church has leveraged the Internet with a Facebook page and blog devoted to its Quran-burning plans.
The American's death brings to at least six the number of U.S. forces killed in Afghanistan this month, along with at least four other non-American members of the international coalition.
Engagements with insurgents are rising along with the addition of another 30,000 U.S. troops, bringing the total number of international forces in the country to more than 140,000.
At least 322 U.S. troops have died in Afghanistan so far this year, exceeding the previous annual record of 304 for all of 2009, according to an AP count.
Petraeus is asking for 2,000 more trainers and field troops for the international force, NATO officials said Monday. It was unclear how many would be Americans.
Also Tuesday, authorities confirmed the ambush killing of a district chief by suspected insurgents in the northern province of Baghlan on Monday afternoon. Nahrin district chief Rahmad Sror Joshan Pool was on his way home after a memorial service for slain anti-Soviet guerrilla leader Ahmad Shah Massoud when rocket-propelled grenades hit his vehicle, setting it on fire, said provincial spokesman Mahmood Haqmal.
Pool's bodyguard was also killed in the attack, and one militant died and two were wounded in the ensuing fire fight with police, Haqmal said.
Five children were killed and five wounded in Yaya Khil district in the southern province of Paktika when an insurgent rocket fired at an Afghan army base hit a home Monday evening, provincial government spokesman Mokhlais Afghan said.
Kidnappers also seized two electoral workers and their two drivers in the western province of Ghor, according to deputy provincial police chief Ahmad Khan Bashir.
Insurgents have waged a campaign of violence and intimidation to prevent Afghans from voting, especially in rural areas, while some pre-election violence has also been blamed on rivalries among the candidates.