Pastor Criticizes Those Who Think Obama Is Muslim 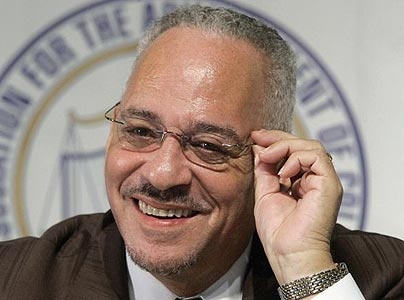 LITTLE ROCK, Arkansas (AP) -- The Rev. Jeremiah Wright, President Barack Obama's controversial former pastor, accused people who wrongly believe Obama is Muslim of catering to political enemies during a fiery speech last Sunday in Arkansas.
In his sermon at New Millennium Church in Little Rock, Wright also criticized supporters of the Iraq war and defended former state Court of Appeals Judge Wendell Griffen for speaking out against it. Griffen serves as the church's pastor.
Wright's only reference to Obama came when he compared Griffen's opponents to those who incorrectly think Obama is Muslim. The president, whose full name is Barack Hussein Obama, is Christian.
``Go after the military mindset ... and the enemy will come after you with everything,'' Wright told the packed church.
``He will surround you with sycophants who will criticize you and ostracize you and put you beyond the pale of hope and say 'you ain't really a Baptist' and say 'the president ain't really a Christian, he's a Muslim. There ain't no American Christian with a name like Barack Hussein,''' he added.
A poll released this month found that nearly one in five people, or 18 percent, said they thought Obama was Muslim, up from the 11 percent in March 2009. The proportion who correctly said he was Christian was 34 percent, down from 48 percent in March of last year. The poll, conducted by the nonpartisan Pew Research Center and its affiliated Pew Forum on Religion & Public Life, surveyed 3,003 people.
Obama cut ties with Wright in 2008, after Wright's more incendiary remarks hit the Internet during the presidential election. At a National Press Club appearance in April 2008, Wright claimed the U.S. government could plant AIDS in the black community, praised Nation of Islam leader Louis Farrahkan and suggested Obama was putting his pastor at arm's length for political purposes while privately agreeing with him.
Obama denounced Wright as ``divisive and destructive'' and left Wright's church in Chicago.
Griffen lost a re-election bid for the Arkansas Court of Appeals in 2008, after high profile battles with a state judicial panel over the rights of judges to speak out on political issues. Griffen was elected in May to a judicial post in Pulaski County, the state's most populous county that includes Little Rock.
Griffen said he invited Wright to speak at his church as part of a monthlong focus on the relationship between faith and the community.
Wright defended Griffen's outspokenness on political issues, saying it showed he was willing to speak out even if it would cost him politically.
Wright's sermon focused on the Old Testament story of the prophet Elisha thwarting an attack by the Aramean Army. Wright repeatedly made references to the war in Iraq and suggested parallels with the Biblical story.
``What was his motivation? Elisha had embarrassed him, like Saddam had embarrassed George Herbert Walker,'' Wright said, referring to the former president.
Wright spoke as Arkansas Republicans hope to capitalize on Obama's unpopularity in the fall election. Obama has not visited the state since 2006, and lost its six electoral votes in the 2008 election.