By The Skanner News
Published: 03 September 2010 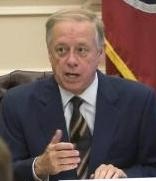 NASHVILLE, Tenn. (AP) -- Gov. Phil Bredesen this week voiced support for a Nashville waiter's claim that a new law allowing guns in bars creates an unsafe workplace.
The Democratic governor told The Associated Press that while he's not familiar with the details of the complaint, he supports the effort to challenge the law allowing handgun carry permit holders to be armed in bars and restaurants that serve alcohol.
``It was a stupid idea when they passed it. It's still a stupid idea,'' Bredesen said. ``I hope somebody will figure out a way to turn it around.''
The Tennessean reports the complaint by an anonymous server at Jackson's Bar and Bistro alleges that the law violates Tennessee Occupational Safety and Health Administration regulations.
The server has seen handguns carried into the restaurant and patrons forcefully ejected from the property, according to the complaint.
The state Legislature passed the law this year after an earlier version was struck down as unconstitutionally vague. Lawmakers overrode two Bredesen vetoes.
``I think always it's been understood that alcohol and guns don't mix very well,'' Bredesen said. ``I was disappointed with what the Legislature did.''
Lawmakers defending the gun law have said it doesn't threaten the workplace, but rather gives ``citizens of this state a right to protect themselves,'' said Republican House sponsor Curry Todd of Collierville in June when his chamber joined the Senate in overriding the governor's veto.
Following the Senate veto a month earlier, Democratic Senate sponsor Doug Jackson of Dickson said he tried to reach out to the governor about his concerns but got ``no communication from the administration.''
``If the governor believes the legislation poses a threat to public safety, then I think communication should have taken place between the executive branch and the legislative branch,'' Jackson said.
Nashville attorney David Randolph Smith represents the server. He was also behind the successful lawsuit that struck down the earlier law. Smith said his client would consider a federal lawsuit if the complaint is unsuccessful.
``The general duty clause of TOSHA says that an employer has a duty to protect and safeguard employees against recognized hazards to human health, safety and life,'' said Smith. ``The only question is, 'Are armed gunmen a hazard in a bar?' ``
A spokesman for the Tennessee Department of Labor and Workforce Development confirmed the complaint had been received and said an inspection would take place in the coming weeks.
Bredesen said he agrees that the guns in bars law endangers workers.
``I think it's a workplace safety issue, and if that's the approach they take they're welcome to do it,'' he said. ``I hope in the end the Legislature will come to their senses and place the line in more reasonable places.''