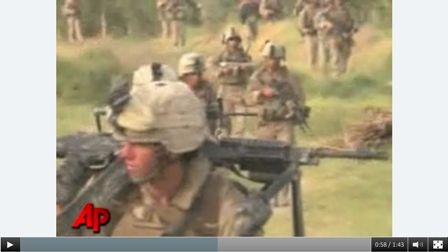 WASHINGTON – Straddling war and peace, President Barack Obama is about to formally end the divisive U.S. combat role in Iraq and restart talks between Israelis and Palestinians, a moment defined more by relief and hope than triumph.
On Tuesday night, Obama will tell the nation from the Oval Office that the U.S. role in Iraq has changed for good, with the remaining U.S. troops to play a supporting role to Iraqi forces. It will be a milestone with no celebration or banners in a still unresolved war, one that wages on years longer and at greater cost than most Americans ever imagined.

The next day, Obama will make his largest investment of political capital to date in the trying Mideast peace process. He will welcome Israeli Prime Minister Benjamin Netanyahu and Palestinian President Mahmoud Abbas for individual talks and a joint dinner, the prelude to direct negotiations between the leaders on Thursday with Secretary of State Hillary Rodham Clinton as host.
Put together, the events amount to what the White House considers to be the capping of Obama's initial phase of foreign policy in the region and the starting of another. Officials see a picture in which Iraq is taking on self-reliance, the Mideast process is showing life, the international sanctions against Iran are taking hold and the added military muscle Obama ordered in Afghanistan is in place. All are considered progress toward solutions requiring deep patience.
Yet there are no victories to declare, and weary Americans have seen turning points come and go. The risk for Obama comes in defining expectations on pursuits that can fall apart at any time, often over events outside his control.
In Iraq, political leaders are in such stalemate that they have been unable to form a government since the March elections. Bombers and gunmen killed more than 50 Iraqis in attacks just last week, a reminder of the terror that can come at any time. In perspective, the levels of violence in Iraq have dropped considerably, but security and democracy are highly unfinished projects.
"This is not, 'Everything is over,'" White House press secretary Robert Gibbs said. "We still have people there. And we'll still have violence there."
On Mideast peace, the resumption of talks is itself a victory, but Clinton set a sober tone even in announcing them. "There have been difficulties in the past; there will be difficulties ahead," she said. "We will hit more obstacles."
And nearly nine years into the war in Afghanistan, support in Congress is showing signs of softening as more and more Americans say they fear the U.S. is becoming bogged down in a conflict it cannot win.
The focus on Iraq and the Mideast talks is Obama's most concentrated public emphasis on foreign policy and national security in weeks. That will continue throughout September as the president marks the ninth anniversary of the Sept. 11 terrorist attacks and heads later in the month for talks with world leaders at the U.N. General Assembly.
Hastening the end of a war he never supported, Obama's message about Iraq is expected to echo a line he said about Afghanistan in his major address about that war last December.
He will say Iraqis must take responsibility for their nation because the country he wants to build most is the United States, a nod to the economic anxiety that has eroded morale at home.
There will be no reference to mission accomplished.
The U.S. role in the war was already on a path to end when Obama took office. All U.S. troops are set to leave Iraq by the end of 2011 under an accord the United States reached during Bush's presidency.
Until then, the mission of U.S. forces will be mainly to help and train Iraqi forces and take part in targeted counterterrorism missions. Obama is already framing the importance of the end of the combat mission as a promise kept.
"The bottom line is this: The war is ending. Like any sovereign, independent nation, Iraq is free to chart its own course," the president said over the weekend. "And by the end of next year, all of our troops will be home."
Obama will be speaking on Aug. 31, his self-imposed deadline for ending the combat operation in Iraq and shrinking the U.S. footprint there to no more than 50,000 troops.
It is already below that number. When he took office, there were more than 140,000 troops in Iraq.
Obama's Oval Office address will come more than seven years after major combat operations were declared over the first time, by then President George W. Bush.
The news of Obama's speech — the deadlines met, the time of transition — has been playing out for weeks. So his mission is to honor the sacrifice of those who have served and to put Iraq in the context of an ongoing fight against terrorists, which the United States is waging in Afghanistan and other places around the world where al-Qaida has rooted.
Before the nighttime address, the president will travel to Fort Bliss, Texas, to thank troops in person. The sprawling Army base in El Paso has contributed heavy armor and tours of soldiers throughout the war.
In the public eye, much of Obama's time has been spent working on the sluggish economy, the devastating oil spill in the Gulf of Mexico and the Democrats' re-election efforts this year.
Although the Iraq war gets less attention now, it was at the heart of the U.S. political debate when Obama launched his bid for the White House in 2007. His opposition to the war and his pledge to end it responsibly helped drive his election.