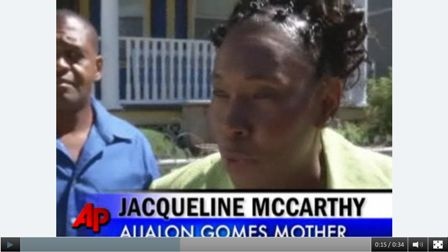 BOSTON – An American who was imprisoned in North Korea for illegally crossing the border has a gentle spirit but is also a person of conviction willing to be bold about what he believes, friends and acquaintances said.
Aijalon Gomes had been teaching English in South Korea when he was imprisoned in January for entering North Korea from China, U.S. officials said. This week, former president Jimmy Carter traveled to the isolated nation to try to win Gomes' release, and end the Boston's man harrowing and unlikely trip from the inner city to a North Korean jail.
"'He ran deep,' I think, would be the phrase that other people might use," said Erik Woodbury, who attended college with Gomes. "I was surprised that he ended up in North Korea, but I wasn't surprised that there was something he was passionate about."
The Skanner News Video here
It's unclear what prompted Gomes to enter the repressive nation. He may have been emulating fellow Christian Robert Park, who was detained after he crossed into North Korea a month earlier to highlight its human rights record, said Jo Sung-rae, a South Korean human rights advocate who met with Gomes. Park was expelled a few weeks later.
Shortly before he left for North Korea, Gomes was photographed in Seoul, South Korea, protesting Park's plight.
Gomes was sentenced in April to eight years of hard labor and fined $700,000 for illegally entering the country. Gomes' relatives have declined to say much about him or his situation, though they pleaded for his release on humanitarian grounds after North Korea's state-run media reported last month that he'd attempted suicide.
The family stayed quiet when asked for personal reflections about Gomes this week.
"They would prefer not to comment," said family spokeswoman Thaleia Schlesinger.
Gomes grew up in an apartment in Boston's Mattapan neighborhood, long a haven for immigrants and now heavily populated by African-Americans and people from Caribbean nations. In high school, he worked after school at Liberty Mutual Insurance Co. as part of a jobs programs that aimed to steer students toward college.
Karen Hinds, who coordinated the program, kept in touch with Gomes, and called him as "a very personable, very likable, very intelligent young man, and very dedicated. ... And as he got older, he was extremely dedicated to his faith."
Gomes graduated high school in 1997 and, with some encouragement from Hinds, headed to Bowdoin College, a small school in Maine that she attended.
Nate Vinton, a sportswriter in New York City, took classes with Gomes, including creative writing, and remembered him as polite, earnest and with a touch of shyness that quickly vanished during conversation. Vinton also saw hints of Gomes' religious conviction.
"He talked admiringly of the Bible as a piece of literature in a class that we took together, which was unusual at that school in that place and time," Vinton said. "That stood out, for sure."
Gomes was an enthusiastic and good-humored member of Bowdoin's student-run theater group and worked with Woodbury, now a college professor in California, on major roles in "Pippin" and bit parts in "Cabaret."
Bowdoin graduate Zach Tabacco said he would occasionally hang out with Gomes, whom he met through friends.
"He was a really sweet and positive guy," Tabacco said. "He wasn't wild by any means, but he definitely had a stronger personality. ... I can believe that if he thought something was right, he's going to do what he can to defend that and to support that."
Gomes moved to South Korea to teach English in the past year or so, Hinds said. Friend and colleague Marshalette Wise said Gomes was unfailingly professional, even outside work, where she saw him wear only slacks, dress shirts and bow ties. She said he was always friendly, helping new teachers become acclimated and assisting her in a move to a new job 90 minutes away.
This week, the first sign of a breakthrough since Gomes' imprisonment came with word that North Korea had agreed to release Gomes to Carter if the former president visited the capital city of Pyongyang. Carter arrived Wednesday.
North Korean dictator Kim Jong Il granted amnesty for Gomes at Carter's request, said Deanna Congileo, a spokeswoman for the former president. Carter will return to the U.S. with Gomes, who is expected to be in Boston by Friday afternoon, Congileo said.
As word of his possible release spread this week, members of a Facebook group called "Save Aijalon Gomes!" expressed relief and optimism that his ordeal would soon end.
"He is an excellent human being and a joy to know," Hinds, a member of the group, said in a post Tuesday. "God has kept him."