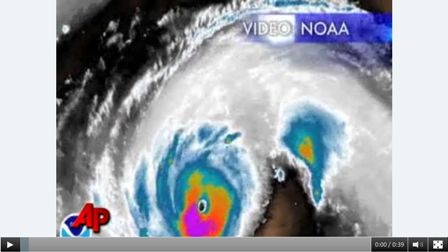 MIAMI – Hurricane Danielle became a Category 4 storm early Friday far out over the Atlantic as it headed in Bermuda's direction and threatened to bring dangerous rip currents to the U.S. East Coast.
Danielle's maximum sustained winds were near 135 mph (215 kph) with some slight strengthening possible.
The Skanner News Video here
Danielle was located Friday about 480 miles (770 kilometers) southeast of Bermuda and moving north-northwest near 12 mph (19 kph). The hurricane's center is forecast to pass well east of Bermuda on Saturday night. But large waves and dangerous surf conditions were expected in Bermuda over the next few days, the National Hurricane Center in Miami said.
Swells from Danielle would also begin arriving on the East Coast of the U.S. on Saturday and were likely to cause dangerous rip currents through the weekend.
Also in the Atlantic, Tropical Storm Earl was moving west with maximum sustained winds near 45 mph (75 kph). Forecasters said Earl could become a hurricane by Sunday.
And in the Pacific, Hurricane Frank was losing strength off Mexico's coast and was expected to weaken to a tropical storm by Friday evening.