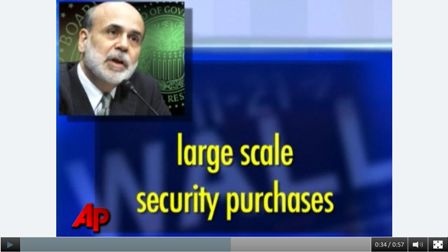 JACKSON, Wyo. (AP) -- Federal Reserve Chairman Ben Bernanke said Friday that the Fed will consider making another large-scale purchase of securities if the slowing economy were to deteriorate significantly and signs of deflation were to flare.
Bernanke acknowledged that the recent pace of growth is "less vigorous than we expected." He described the outlook as uncertain and said the economy "remains vulnerable to unexpected developments."
At the same time, he said growth is likely to pick up next year. He downplayed the odds of another recession, even after a series of dismal reports on housing and manufacturing this week stoked fears that the economy may be on the verge of another downturn.
His remarks came 90 minutes after the government said the economic growth slowed sharply in the second quarter to a 1.6 percent pace.
The Skanner News Video here
Bernanke stopped short of committing to any specific action. But he raised the prospect of another Fed purchase of securities, most likely government debt or mortgage securities, to drive down rates on mortgages and other debt to spur more spending by Americans.
"I believe that additional purchases of longer-term securities should the FOMC choose to undertake them, would be effective in further easing financial conditions,"he said. The FOMC stands for the Federal Open Market Committee, the group of Fed policymakers that makes decisions on interest rates and other steps to aid the economy.
The other two options he laid out are:
-Providing more information in the Fed's post-meeting policy statements about how long Fed policymakers would continue to keep rates at record lows. For more than a year, the Fed has been pledging to hold rates at ultra-low levels for an "extended period."
- Cutting to zero the interest the Fed pays for banks to keep money parked at the Fed. That rate is now 0.25 percent.
"The issue at this stage is not whether we have the tools to help support economic activity and guard against disinflation. We do," Bernanke said. "The issue is instead whether, at any given juncture, the benefits of each tool, in terms of additional stimulus, outweigh the associated costs or risks of using each tool."
Investors appeared to be pleased by Bernanke's remarks. The Dow Jones industrial average rose 114 points in early trading. Broader indexes were also up.
Brian Bethune, economist at IHS Global Insight, said the Fed is right to hold off until it becomes clear that the weakening trend in the U.S. economy is persisting. If the economy shrinks in the third quarter, he said, the central bank's hand would be forced.
"I think they'd have to make a move," he said.
The Fed's strategy carries no guarantees. Short-term interest rates near zero have yet to rejuvenate the economy. The benefits of federal stimulus programs are fading, and Congress has declined to pass any major new economic aid. That is putting immense pressure on Bernanke to provide relief, and he has no easy options for fixing the economy.
At a Fed meeting earlier this month, Bernanke persuade his colleagues to use a relatively small amount of money generated by its portfolio of mortgage securities to buy government debt. The goal is to further ease rates on mortgages and other loans.
The economy, which has been losing momentum all year, slowed to a near crawl in the second quarter.
At such a weak pace, the nation's 9.5 percent unemployment rate could climb and pass 10 percent later this year or early next year, some analysts say. With economic conditions worsening, there's the danger that consumers and businesses will turn even more cautious in their spending, causing the economy to stall, or worse, slip into reverse.
Bernanke said the prospect of high unemployment for a long period is a central concern for the Fed. He also made clear that he is determined to prevent the United States from slipping into a deflationary spiral.
Deflation is a widespread and prolonged drop in wages, the prices of goods and services and in the value of stocks, houses and other assets. The country's last serious episode of deflation was in the 1930s. Keeping interest rates super low and taking unconventional to lower rates on mortgages and other debt is a way to nip any deflationary forces.
Japan's deflation problems and stagnant growth caused the country to suffer what many refer to as a "lost decade" in the 1990s. It is still fighting deflation now even as it has kept its key interest rates near zero like the Fed.
Although most economists believe the odds are relatively low that the United States will slide into deflation, it can't be ruled out given the economy's weak growth, they say.
Despite the economy's recent slowing, Bernanke, however, continues to believe there will be "some pickup" in growth in 2011, but not enough to substantially drive down unemployment and reduce the vast ranks of the unemployed.
"We have come a long way, but there is still some way to travel," Bernanke said.