Lisa Wilmore Special to the NNPA from the District Chronicles
Published: 28 August 2010 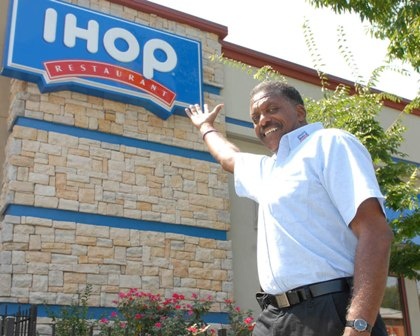 WASHINGTON (NNPA) - It was 1964. Eighteen-year-old, high school drop out Clarence Jackson, Jr. was handed a newly delivered baby.
Jackson looked into the eyes of his little son—Clarence Jackson, III, and vowed to always be there for his children and show them how to grow up as decent human beings.
Today, at 64, Jackson has achieved that goal. As a family, Jackson and his two sons, Tyoka and Clarence Jackson III own the first IHOP franchise in Washington, DC at 1523 Alabama Avenue, SE. They plan to open a second one in the North West neighborhood of Columbia Heights in October.
"If I told you the beginning, you would think you already knew the ending," said Tyoka of his father. "My father's story is about overcoming odds. Owning DC's first IHOP in southeast right at Alabama and Stanton is one of the odds."
The eatery celebrated its second year anniversary on Aug. 1, a major milestone marking surviving the economic downturn last year. All three Jackson men admitted that they were fearful at points but never dreamed of giving up. Now they are planning an expansion to include two more DC locations, one in the newly thriving Columbia Heights shopping center.
Jackson grew up in Ward 8 in the 1940s and 50s, not far from where he and his sons now greet pancake lovers with smiles in a pristine IHOP. As a child running around Ward 8, he didn't even dream of what he wanted to do when he grew up. He just knew that he wasn't going to jail.
"My mother said if I went to jail, she would not come and visit me, and I believed her," he said of the family matriarch, Gertrude Lyon. "I guess I was scared straight."
His career indecisiveness followed him through high school.
He started courses at Phelps High School to become a barber. But he lost interest. He started to cut school and received failing grades.
Mother Lyon took action. The single mother dispatched Jackson to Virginia to live with his grandparents and to attend Hoffman High School. But that didn't last.
His high school sweetheart, Juanita, at Spingarn was expecting. Jackson had to return to DC. He dropped out of high school to find employment to support his new family.
With no high school diploma, his options were limited. He took the best position he could find -- janitor at Cardozo Senior High School, cleaning toilets and scrubbing floors. He was 18.
At 21, he got a better paying job as a custodian at the DC Public Library on 7th and New York Avenue, NW. Charles Gray, then head of the department of buildings and grounds, took notice of Jackson's work ethic and promoted him to supervisor of the custodial staff in the entire DC Public Library System at age 27.
But Gray noticed something else in Jackson — an unusual interest in engineering.
"I would wonder where does the light go when you turn off the switch?" Jackson remembers rehearsing the age-old question.
Gray moved Jackson into a mechanical engineering apprenticeship position.
The library job became his ticket to an engineering diploma. It paid for engineering classes at the National Association of Power Engineers, studying at night after work alongside his two children. At his job, Jackson went from a sixth class to a third class mechanical engineer.
Still, Jackson wondered how he was going to buy a house for his budding family. He figured that he would use a GI Bill from the military to purchase the first home. So he joined the DC National Guard Army Reserves. His natural leadership skills drew the attention of the National Guard and straight out of basic training he moved up in rank first as a private first class, to specialist and finally to sergeant.
But, the words of his Uncle Melvin always loomed in his thoughts: "You got to own your own."
Uncle Melvin's crab house was famous for its connection to the community and saw everyone from famous Disc Jockey Petey Greene to Sugar Ray Leonard. The three Jackson men would often work alongside Uncle Melvin.
"We learned a lot from Melvin and he motivated us to be entrepreneurs," said Jackson. "You have to motivate the people and show them that you care," he recalls Uncle Melvin saying.
Uncle Melvin's words and encouragement sunk in. Since the mid 80s, Jackson delved into several family businesses including, a furniture moving company and investment company, and a property management company which owns five apartment buildings in Southeast DC.
In 2008, he opened IHOP around the time developers planned rejuvenation developments in Congress Heights. A multi-million dollar project brought a grocery story, single-family housing, a national bank and the Town Hall Education, Arts and Recreation Campus, THEARC, a combined education, cultural and social oasis at Stanton Road and Mississippi Ave.
"When we opened the store, we all bussed tables, washed dishes and cleaned toilets," Clarence Jackson, III, remembers. Monique, Jackson's daughter, serves as kitchen manager and is known in the area for her special recipe for the restaurant's Fish Fridays. Also on staff are Jackson's nieces, nephews, and grandchildren.
DC Council Chairman and Mayoral candidate Vincent Gray gloated over the eatery, which he hopes becomes a landmark.
"Mr. Jackson, where do you think these people went before you built this store?" he asked on one of his recent visits to the Alabama Avenue IHOP.
Congress Heights resident Janetta Chambers, 45, answered the question. She said that the people in the community had grown tired of traveling to Maryland just to have a decent meal.
"We deserve it and appreciate it," she said.
Sixty-year-old Grace Jones has lived in the neighborhood for 26 years. She shared her reaction to the restaurant's opening: "I am glad that he did come and is building up this community. This is a start for us," she said. "It's like you're human again."