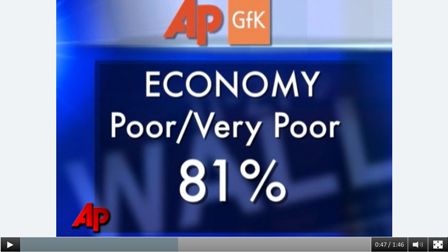 WASHINGTON — Employers appear to be laying off workers again as the economic recovery weakens. The number of people applying for unemployment benefits reached the half-million mark last week for the first time since November.
It was the third straight week that first-time jobless claims rose. The upward trend suggests the private sector may report a net loss of jobs in August for the first time this year.
Obama at New Low for Handling Economy, The Skanner Video here
Initial claims rose by 12,000 last week to 500,000, the Labor Department said Thursday.
Homebuilders and other construction firms are laying off more workers as the housing sector slumps after the expiration of a popular homebuyers' tax credit. State and local governments are also cutting jobs to close large budget gaps.
"The rise in initial jobless claims over the past three weeks makes it difficult to maintain confidence in the recovery and suggests the labor market is backtracking more than we first expected," Ryan Sweet, an economist at Moody's Analytics, wrote in a note to clients.
Stocks tumbled on the fear of more layoffs and weak job growth. The Dow Jones industrial average fell 150 points in morning trading. Broader indexes also declined.
Jobless claims declined steadily last year from a peak of 651,000 in March 2009 as the economy recovered from the worst downturn since the 1930s. After flattening out earlier this year claims have begun to grow again.
"This is obviously a disappointing number that shows ongoing weakness in the job market," said Robert Dye, senior economist at the PNC Financial Services Group.
Dye said that claims showed a similar pattern in the last two recoveries, but eventually began to fall again. The current elevated level of claims is a sign employers are reluctant to hire until the rebound is well under way. That's what happened in the recoveries following the 1991 and 2001 recessions, which were dubbed "jobless recoveries."
The increase suggests the economy is creating even fewer jobs than in the first half of this year, when private employers added an average of about 100,000 jobs per month. That's barely enough to keep the unemployment rate from rising. The jobless rate has been stuck at 9.5 percent for two months.
The four-week average, a less volatile measure, rose by 8,000 to 482,500, the highest since December.
The number of people continuing to receive benefits fell by 13,000 to 4.5 million, the department said. The continuing claims data lags initial claims by one week.
But that doesn't include millions of people receiving extended unemployment insurance, paid for by the federal government. About 5.6 million unemployed workers were on the extended unemployment benefit rolls, as of the week ending July 31, the latest data available. That's an increase of about 300,000 from the previous week.
During the recession, Congress added up to 73 extra weeks of benefits on top of the 26 weeks customarily provided by the states. The number of people on the extended rolls has increased sharply in recent weeks after Congress renewed the extended program last month. It had expired in June.
Private employers added only 71,000 jobs in July. But that increase was offset by the loss of 202,000 government jobs, including 143,000 temporary census positions.
July marked the third straight month that the private sector hired cautiously. Economists are concerned that the unemployment rate will start rising again because overall economic growth has weakened significantly since the start of the year.
In a healthy economy, jobless claims usually drop below 400,000. But the recent increases in claims provide further evidence that the economy has slowed and could slip back into a recession. Many analysts are worried that economic growth will ebb further in the second half of this year.
After growing at a 3.7 percent annual rate in the first quarter, the economy's growth slowed to 2.4 percent in the April-to-June period. Some economists forecast it will drop to as low as 1.5 percent in the second half of this year.