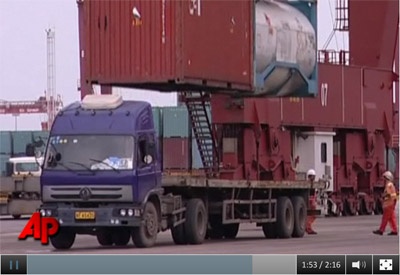 TOKYO — Japan lost its place as the world's No. 2 economy to China in the second quarter as receding global growth sapped momentum and stunted a shaky recovery.


Gross domestic product grew at an annualized rate of just 0.4 percent, the government said Monday, far below the annualized 4.4 percent expansion in the first quarter and adding to evidence the global recovery is facing strong headwinds.
The United states is considered to be the single country with the largest GDP, but when all the nations of the European Union are factored together, that is the world's largest.
The figures underscore China's emergence as an economic power that is changing everything from the global balance of military and financial power to how cars are designed. It is already the biggest exporter, auto buyer and steel producer, and its global influence is expanding.
World stock markets mostly fell Monday on Japan's second-quarter figures. Japan's benchmark Nikkei 225 stock index fell 0.6 percent, hovering close to a 13-month low. In Europe, the FTSE 100 index of leading British shares was down 0.6 percent while France's CAC-40 fell 1 percent. Germany's DAX, however, was up 0.1 percent.
In early morning trading on Wall Street, the Dow Jones industrial average fell 60.02, or 0.6 percent, to 10,242.83.
China has been a major force behind the world's emergence from deep recession, delivering much-needed juice to the U.S., Japan and Europe. Tokyo's latest numbers, however, suggest that Chinese demand alone may not be enough for Japan or other economic giants.
"Japan is the canary in the gold mine because it depends very much on demand in Asia and China, and this demand is cooling quite a bit," said Martin Schulz, senior economist at Fujitsu Research Institute in Tokyo. "This is a warning sign for all major economies that just focusing on overseas demand won't be sufficient."
China has surpassed Japan in quarterly GDP figures before, but this time it's unlikely to relinquish the lead.
China's economy will almost certainly be bigger than Japan's at the end of 2010 because of the huge difference in each country's growth rates. China is growing at about 10 percent a year, while Japan's economy is forecast to grow between 2 to 3 percent this year. The gap between the size of the two economies at the end of last year was already narrow.
Japan's nominal GDP, which isn't adjusted for price and seasonal variations, was worth $1.286 trillion in the April-to-June quarter compared with $1.335 trillion for China. The figures are converted into dollars based on an average exchange rate for the quarter.
Faced with feeble growth, Japan's government is considering fresh stimulus measures to support the economy, likely including ways to boost consumer spending on eco-friendly products, Kyodo News agency said late Monday, quoting unnamed government sources.
Japan has held the No. 2 spot after the U.S. since 1968, when it overtook West Germany. From the ashes of World War II, the country rose to become a global manufacturing and financial powerhouse. But its so-called "economic miracle" turned into a massive real estate bubble in the 1980s before imploding in 1991.
What followed was a decade of stagnant growth and economic malaise from which the country never really recovered. Prime Minister Naoto Kan now faces a long list of daunting problems: a rapidly aging and shrinking population, persistently weak domestic demand, deflation, a strong yen and slowing growth in key export markets.
In contrast, China's growth has been spectacular, its voracious appetite fueling demand for resources, machinery and products from the developing world as well as rich economies like Japan and Australia. China is Japan's top trading partner.
China's rise has produced glaring contradictions. The wealth gap between an elite who profited most from three decades of reform and its poor majority is so extreme that China has dozens of billionaires while average income for the rest of its 1.3 billion people is among the world's lowest.
Japan's people still are among the world's richest, with a per capita income of $37,800 last year, compared with China's $3,600. So are Americans at $42,240, their economy still by far the biggest.
"We should be concerned about per capita GDP," said Kyohei Morita, chief economist at Barclays Capital in Tokyo. China overtaking Japan "is just symbolic," he said. "It's nothing more than that."
But the symbolism may be exactly the "wake-up call" Japanese leaders need, said Schulz of the Fujitsu Research Institute. "Japan is always strangely inward looking," he said. "And nobody is doing anything about it."
Japan's people appear resigned to the power shift. A national poll conducted earlier this year by the Asahi, one of Japan's biggest newspapers, showed a roughly equal split between those that believed Japan's fall to No. 3 posed a major problem and those who did not. More than half of the 2,347 respondents said Japan does not need to be a global superpower.
The country's annualized growth in the second quarter was also sharply below expectations of 2.3 percent in a Kyodo news agency survey of analysts. On a quarterly basis, Japan's GDP — or the total value of the nation's goods and services — grew 0.1 percent from the January-March period, the Cabinet Office said.
Consumer spending, which accounts for about 60 percent of GDP, was flat from the previous quarter, the figures showed. Capital spending by companies rose 0.5 percent, while public investment fell 3.4 percent.
The outlook for the third quarter is uncertain. Private consumption appears to be solid so far, helped in part by unusually hot weather, said Masamichi Adachi, senior economist at JP Morgan Securities Japan. But the slowing global economy is weakening exports and production.
A stronger yen, which hit a 15-year high against the dollar last week, also poses a major risk for the country's export-driven economy. Yen appreciation reduces the value of repatriated profits for companies like Toyota Motor Corp. and Sony Corp. and makes their products more expensive abroad.
The currency worries led Finance Minister Yoshihiko Noda to say last week that he is closely monitoring foreign exchange rates. Bank of Japan Gov. Masaaki Shirakawa released a similar statement to try to calm markets.