Boeing Jetliner Breaks Up Over Colombia; All But One Survive 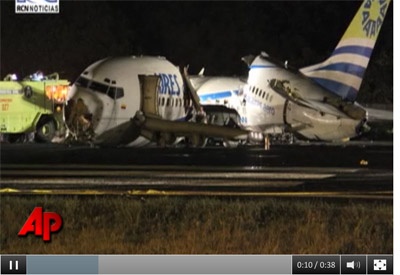 BOGOTA, Colombia – A Boeing 737 jetliner with 131 passengers aboard crashed on landing and broke into three pieces at a Colombian island in the Caribbean early Monday. The region's governor said it was a miracle that only one person died.
Colombian Air Force Col. David Barrero said officials were investigating reports the plane had been hit by lightning before crashing at 1:49 a.m. while landing at San Andres Island, a resort island of 78,000 people about 120 miles (190 kilometers) east of the Nicaraguan coast.

San Andres Gov. Pedro Gallardo said 125 passengers and six crew members had been aboard, but the only person killed was Amar Fernandez de Barreto, 68.
"It was a miracle and we have to give thanks to God," that only one person died, said Gov. Pedro Gallardo.
The Aires airline said in an e-mail that passengers aboard the plane that left Bogota about midnight included eight U.S. citizens and four Brazilians. They were not identified.
Ninety-nine passengers were taken to the Amor de Patria Hospital on San Andres, said the hospital director, Dr. Robert Sanchez. He said only four suffered major injuries.
"It's incredible. For the dimension (of the accident), there should be more," he said.
Sanchez said an initial examination indicated that Fernandez de Barreto may have died of a heart attack.
Barrero, commander of the Caribbean Air Group, said by telephone from San Andres that "the skill of the pilot kept the plane from colliding with the airport."
He said the cause of the accident was uncertain. "You can't speculate. Lightning? A gust of wind? The investigation will say."
Barrero said part of the 7,800-foot (2,380-meter) runway had been closed because parts of the plane were still scattered across it. But enough was usable that air ambulances would be able to land.
Police Gen. Orlando Paez said by telephone that a group of police officers who had been waiting at the airport for the plane to take them back to the Colombian mainland aided in rescuing the victims.