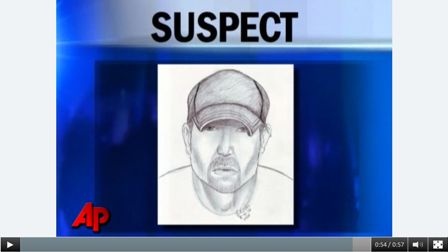 ATLANTA — A possible suspect in a string of 20 stabbings that terrorized people across three states and left five dead was arrested at an airport as he tried to board a plane for Israel, officials said Thursday.
The man was arrested late Wednesday and was being held on unrelated charges, police in Leesburg, Va., said.
He was arrested at Hartsfield-Jackson Atlanta International Airport where he was trying to board a Delta Air Lines flight to Tel Aviv, Israel, said Rafael Lemaitre, a spokesman at U.S. Customs and Border Protection.

The victims have been mostly Black, and police have suspected the attacks may have been racially motivated. The youngest victim was 17; the oldest was 60. They ranged in size from 5-foot-4 inches and 120 pounds to 6-foot-1 and 190 pounds.

The suspect has ties to Flint, Mich., where the attacks began May 24, and to Leesburg, the site of three similar attacks last week, Leesburg Police Officer Chris Jones said.
He is an Israeli citizen who is in the U.S. legally, according to a law enforcement official who spoke on the condition of anonymity due to the ongoing investigation.
"While this is a key step in the investigation there are still many issues that need to be addressed before we identify this individual as the person responsible for this horrific crime spree," Jones said.
Police had been focusing their hunt on Flint — where 16 of the stabbings took place — until Leesburg police reported three attacks. Authorities in Toledo, Ohio, say a stabbing in that city Saturday appears to be linked to the violent spree.
As of Wednesday afternoon, a task force led by the Michigan State Police and including the FBI had received 469 tips. Those tips have been passed out to the various law enforcement teams involved in the case.
The attacks began surfacing in late spring, and picked up the pace as the stabber traversed the country.
Police have said the man's attacks usually follow a pattern: He approaches Black men late at night on lonely urban roads, and asks for directions or help with a broken-down car. Then, without warning, he pulls out a knife and strikes. Then, he speeds away in his vehicle, leaving them for dead.
The brazen nature and the frequency of the attacks — the assailant has struck an average of about once every four days since the first stabbing in May — has terrified some of those in cities he's already targeted.
Associated Press writers David Runk in Mount Morris Township, Mich., and Jeff Karoub, David Aguilar and Mike Householder in Detroit contributed to this report. Williams reported from Flint, Mich.