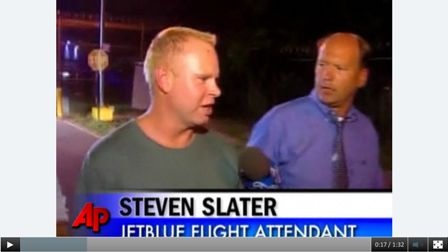 NEW YORK – No fed-up worker has ever said "I've had it" quite like Steven Slater.
Prosecutors say the JetBlue flight attendant flipped out over a fight with an agitated traveler Monday, cursing over the intercom before grabbing some beer from the plane's galley and making a grand exit down the emergency slide at Kennedy Airport. He has been charged with felonies but elevated to folk-hero status by thousands who shrugged off allegations that Slater endangered others and praised him for his take-this-job-and-shove-it moment.

Slater, whose father was an airline pilot, wore a slight smile Tuesday as he was led into a Queens courtroom to be arraigned on charges of criminal mischief, reckless endangerment and trespassing, counts that carry a maximum penalty of seven years in prison. The judge set his bail at $2,500, which remained unpaid late Tuesday afternoon.
The 38-year-old airline veteran, who lives steps from the beach in Queens a few miles from the airport, had been flying long enough to see much of the gleam of the air travel experience tarnished by frayed nerves, rising fees, plummeting airline profits and packed cabins.
"One by one all of these niceties have been removed from the customer experience. I think subconsciously, it's causing passengers to be very angry," said Pauline Frommer, creator of the Pauline Frommer Guides and daughter of Arthur Frommer. "There's an us-versus-them mentality."
Sentiment online appeared to fall in Slater's court. By early Tuesday afternoon, more than 20,000 people had declared themselves supporters of Slater on Facebook, and the number was growing by thousands every hour. At least one fan set up a legal fund on his behalf.
"Overwhelmingly people said it should have been the passenger who was ejected from the plane," said George Hobica, founder of AirfareWatchdog.com, speaking about response to his site's blog on the incident. "I've never seen such an outpouring of support for a flight attendant."
Slater's attorney, Howard Turman, said his client had been drawn into a fight between two female passengers over space in the overhead bins as the Pittsburgh-to-New York flight was awaiting takeoff. Somehow, Slater was hit in the head, Turman said.
After JetBlue Flight 1052 landed in New York, one of the women who had been asked to gate-check her bag was enraged that it wasn't immediately available, Turman said.
"The woman was outraged and cursed him out a great deal," Turman said. "At some point, I think he just wanted to avoid conflict with her."
That's when he deployed the slide, Turman said. A spokesman for the Port Authority of New York and New Jersey, which controls the airport, said Slater took at least one beer from the plane galley on his way out.
"Those of you who have shown dignity and respect these last 20 years, thanks for a great ride," Slater said over the plane's loudspeaker, according to prosecutors.
Prosecutors said Slater's actions could have been deadly if ground crew workers had been hit by the emergency slide, which deploys with a force of 3,000 pounds per square inch. Turman said Slater had opened the hatch and made sure no one was in the slide's path before deploying it.
Passenger Phil Catelinet said he heard Slater's profanity-laced announcement over the public address system before he left the plane. He said Slater ended by saying, "I've had it." He described the announcement as "the most interesting part of the day to that point" but didn't see Slater use the exit slide or grab the beer.
It wasn't until he saw Slater on an airport train and overheard him talking about the escapade that he put it together.
"He was smiling. He was happy he'd done this," Catelinet told NBC's "Today."
Initially, authorities blamed Slater's blowup on a passenger refusing to sit down as the plane taxied to the gate. But after interviewing more witnesses, investigators confirmed the dispute had begun in Pittsburgh and resumed at the end of the flight, a law enforcement official told The Associated Press, speaking on condition of anonymity because the investigation was ongoing.
JetBlue spokesman Mateo Lleras said Slater had been removed from duty pending an investigation. Prosecutors said no criminal allegations had been made against the passenger.
Turman said Slater was under stress because his mother, Diane Slater of Thousand Oaks, Calif., has lung cancer. His father, a pilot for American Airlines, died more than a decade ago. Reached at home by phone, his mother declined to comment.
"He's not this type of individual at all," said Slater's former grandfather-in-law, Harry Niethamer. "He's always been a gentleman and he loves that job. He had opportunities to do other things but he always went back to that type of work and apparently was always good at it."
Niethamer, 82, of Downey, Calif., said his granddaughter was previously married to Slater and they have a son who is now in his mid-teens. He said Slater was a flight attendant for different airlines over many years.
With airlines responding to waning passenger demand by cutting flights and packing remaining ones to the gills, it's no surprise many people can see Slater's side of the story, said Thom McDaniel, a union president and flight attendant at Southwest Airlines for 18 years.
"The response has been amazing and that's probably in part because those people have been stuck on a lot of full, hot planes in the last three months," he said.
___
Contributing to this report were Associated Press writers David B. Caruso, Colleen Long and Tom Hays, AP Business writer Samantha Bomkamp, AP Travel Editor Beth J. Harpaz, researcher Jennifer Farrar and video journalist David Martin in New York; and Sue Manning in Los Angeles.