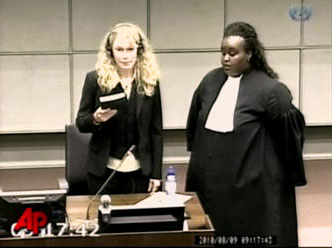 LEIDSCHENDAM, Netherlands – Naomi Campbell told Mia Farrow that she received a "huge diamond" from the former president of Liberia, the actress said from the witness stand Monday, contradicting the model's testimony that she didn't know the value of the gift from accused war criminal Charles Taylor.
The prosecution called Farrow, and Campbell's former agent, to testify about uncut diamonds that Taylor allegedly gave the model after a September 1997 party they all attended that was hosted by then-South African President Nelson Mandela.

Prosecutors have pulled the celebrity witnesses into Taylor's trial hoping they will show Taylor was in possession of at least one "blood diamond" — stones sold to fund wars. Prosecutors say Taylor traded guns to rebels in neighboring Sierra Leone in exchange for uncut diamonds during Sierra Leone's 1992-2002 civil war, which left more than 100,000 dead in the West African nation.
Taylor says he is innocent of war crimes and has denied ever trading in diamonds.
Defense lawyers accused the prosecution of calling the unlikely witnesses as a publicity stunt to raise the profile of the trial, which has gone on for more than two years.
Campbell, who resisted appearing before the war crimes court for months, testified under subpoena Thursday that she was given several small stones by men she didn't know after the dinner in Pretoria. The British model said she hadn't known they were diamonds nor who had sent them, and suggested that Farrow had commented at breakfast the next morning that they were probably diamonds from Taylor.
But Farrow testified that Campbell had told other guests over breakfast in 1997 she had received a large gem from Taylor. She said Campbell said she planned to give it to charity — the Nelson Mandela Children's Fund.
"She said that in the night she had been awakened, some men were knocking at the door, and they had been sent by Charles Taylor, and they had given her a huge diamond," Farrow told the court. She added that Campbell seemed "excited, happy" at the gift.
White said Taylor and Campbell had "flirted" across the table at dinner.
At one point, White said, Campbell leaned back to speak to her. She "was very excited and she told me he was going to give her some diamonds," White told the court.
But under cross examination, defense lawyers strongly challenged the testimony of both Farrow and White.
"You have a very powerful motive for lying," Courtenay Griffiths said, noting that White is currently suing Campbell for millions of dollars over an alleged breach of contract.
Campbell has served community service twice after pleading guilty in minor assault cases. A few of her former aides and maids have sued her, accusing her of violent outbursts and usually settling on undisclosed terms.
Meanwhile Farrow, 65, conceded she had never seen the diamond or diamonds herself.
Confronted with Campbell's testimony that the gift was three small rough diamonds that looked like pebbles rather than one "huge' polished diamond, Farrow stuck by her story, saying "I can only tell you what Naomi Campbell said."
"I think I would have remembered diamonds in the plural," Farrow said, calling it "sort of an unforgettable moment."
South African businessman Jeremy Ractliffe, the former head of the Nelson Mandela Children's Fund, on Friday confirmed that he still had three stones he had received from Campbell after the 1997 dinner. He said he hadn't done anything with them because he feared that a blood diamond scandal might attach to Mandela or Campbell as a result. He has now handed them over to South African authorities and they have been identified as uncut diamonds.
On Monday, Ractliffe told The Associated Press in Johannesburg he is cooperating with a South African police investigation into whether any laws were violated in the handling of the diamonds.
In court, Judge Julia Sebutinde asked Farrow whether it was possible she might have seen the 2006 movie "Blood Diamond" and been influenced by its plot, which centers on a single large diamond.
"Your honor, I know she didn't say a few, a certainly not 'stones'. She may not have used the word 'huge'," Farrow said. "But it wasn't several diamonds and it certainly wasn't stones because ... why would she give stones to Nelson Mandela's charity?"
Taylor denies all 11 charges he faces at the Special Tribunal for Sierra Leone, including murder, rape, sexual enslavement and recruiting child soldiers. Prosecutors allege Taylor armed and commanded Sierra Leone rebels who murdered and mutilated tens of thousands of civilians.
___
Associated Press writer Donna Bryson contributed to this report from Johannesburg.