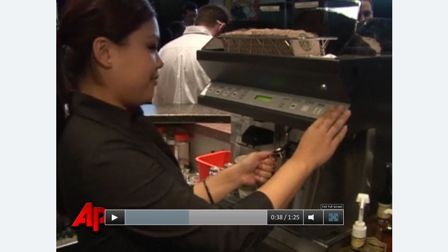 NEW YORK — Stocks and interest rates dropped Friday after a disappointing employment report renewed concerns about a slowdown in economic growth.
The Dow Jones industrial average fell 140 points in midday trading. Broader indexes also fell more than 1 percent.
The Skanner News Video here
The Labor Department said 131,000 jobs were cut last month, though that was primarily tied to layoffs of temporary census workers. The unemployment rate remained unchanged at 9.5 percent. Economists polled by Thomson Reuters had forecast 65,000 jobs would be cut last month and the unemployment rate would rise to 9.6 percent.
Because of the cuts to census workers, investors were largely focused on private sector jobs, which account for most jobs in the country. Private employers added just 71,000 jobs, well short of the 90,000 expected by economists.
The Labor Department also sharply revised lower the number of jobs private employers added in June. The department now says just 31,000 private sector jobs were added in June, compared with a previous estimate of 83,000.
"The Labor Department numbers the last two, three months show the economy has hit a soft spot," said Michael Strauss, chief economist and market strategist at Commonfund.
Persistently high unemployment is the most significant drag on the U.S. economy, and has been a key focus for investors. Even people who are employed have been slowing down their spending, which hurts the economy even more. Economists say that about 200,000 new private sector jobs would need to be added each month to drive the unemployment rate lower.
Retailers were hurt following the report as investors expected shoppers to continue to hold on to their money. J.C. Penney Co., Macy's Inc. and Target Corp. were among those that fell.
Economic data over the past three months has indicated a slowdown in growth, and investors are unsure just how much more the recovery will weaken. The disappointing jobs data magnifies worries that slowing growth could end up leading the country back into recession during the second half of the year.
The latest weak sign on the labor market brings heightened attention to the Federal Reserve's meeting next week. The Fed let several economic stimulus programs expire earlier this year such as purchasing mortgage-backed securities, and investors are now wondering whether the central bank will consider new steps to encourage lending again.
In midday trading, the Dow Jones industrial average fell 140.84, or 1.3 percent, to 10,534.14. The Standard & Poor's 500 index fell 15.52, or 1.4 percent, to 1,110.29, while the Nasdaq composite index fell 28.68, or 1.3 percent, to 2,264.38.
About five stocks fell for every two that rose on the New York Stock Exchange, where volume came to a very light 432.9 million shares.
"The volume has just been anemic," said Andrew Frankel, president of Stuart Frankel and a trader of the floor of the exchange. "Most participants are just sitting on their hands."
Low volume can exaggerate gains and losses in the market. It also indicates that traders are just unsure of where the economy is headed.
Investors bid up Treasury prices after the employment report came out, driving interest rates lower in the bond market. The yield on the 10-year Treasury note, which moves opposite its price, fell to 2.83 percent from 2.91 percent late Thursday. Its yield, which helps set interest rates on mortgages and other consumer loans, is hovering near levels not seen since April 2009.
There were a couple of more upbeat figures deeper in the report that could indicate hiring might eventually pick up. Average hourly earnings rose 0.2 percent last month after falling 0.1 percent in June. Earnings were expected to rise 0.1 percent.
Also, the average work week rose to 34.2 hours from 34.1 hours in June. Economists had predicted average hours would remain unchanged.
The work week details are considered important because it shows how much work employers are squeezing out of current staff. If it climbs too high, productivity of current workers gets exhausted and employers must then turn to hiring new employees to handle the extra work.
J.C. Penney shares fell 69 cents, or 3.1 percent, to $21.43. Macy's dropped 64 cents, or 3.2 percent, to $19.14, while Target fell $1.10, or 2.1 percent, to $51.74.
European markets pulled back from highs following the U.S. jobs report as well. Britain's FTSE 100 fell 0.6 percent, Germany's DAX index fell 1.2 percent, and France's CAC-40 dropped 1.3 percent. Japan's Nikkei stock average fell 0.1 percent, but was closed for the week before the jobs data was released.