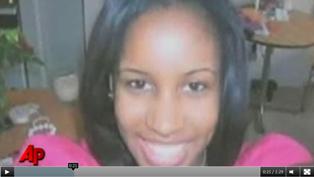 BALTIMORE (AP) -- If anyone knows how Phylicia Barnes spent her 17th birthday, they aren't saying. Three weeks after the visiting honor student vanished in Baltimore, police are pessimistic, but her parents are holding onto hope.

Barnes, from the small North Carolina city of Monroe, about 25 miles southeast of Charlotte, disappeared Dec. 28 while visiting her older half-siblings for the holidays. Since then, all calls to her cell phone have gone straight to voicemail, she's been a no-show on her social media profiles and she hasn't used her ATM card.

Baltimore police call it one of the strangest and most vexing missing persons cases they've investigated, and despite getting help from the FBI, they have few leads.

"I'm going to wait until she comes home to give her a party," Sallis said by phone Wednesday from Atlanta, where she's relocated since her daughter's disappearance. "I spent her day being happy. I was happy when she was born, and every 12th of January, I'm going to be happy because that was a happy day for me."

Police alerted local media soon after Barnes' disappearance, sounding the alarm that her disappearance was unusual because she had no history of disputes with her family or trouble with the law.

Investigators believe she may have been kidnapped and possibly taken out of state, and with no suspects or physical evidence, they fear the worst, police spokesman Anthony Guglielmi said. More than 100 police officers combed a northwest Baltimore park a week after her disappearance, but found no signs of a body or clues to her whereabouts.

Barnes' smiling face, in a photo taken from her Facebook page, greets motorists on billboards as they drive into the city. Police have gotten about 70 tips, but none has panned out, Guglielmi said.

Investigators are re-interviewing about a dozen friends and associates of Barnes' 27-year-old half-sister, Deena Barnes, who saw the teenager in the days before she disappeared, and are hammering away at any discrepancies in their statements, Guglielmi said. Police have executed search warrants but haven't recovered any evidence.

Sallis has expressed concern about the number of strangers Deena Barnes allowed into her apartment while Phylicia was staying there, but Guglielmi said there's no indication those individuals were up to anything nefarious, describing the atmosphere at the apartment as similar to a college dorm.

Barnes is an honor student at Union Academy, a public charter school in Monroe, and she was on track to graduate early and had already been accepted to several colleges.

Two years ago, she reconnected with her half-siblings on Facebook, and she traveled to Baltimore several times to visit them, her mother said.

But since Barnes' disappearance, she regrets allowing her daughter to stay with Deena, who admitted allowing Phylicia to drink alcohol and was generally more permissive with the teenager than Sallis would have liked, Sallis said.

Deena Barnes could not be reached for comment Wednesday. Phylicia's father, Russell Barnes -- who is long divorced from Sallis and did not raise Phylicia -- did not respond specifically to Sallis' complaints but said Wednesday that criticism of Deena was unfair.

Russell Barnes has been in Baltimore since the day after Phylicia's disappearance and said Wednesday he intends to remain in the city until she is found. He is organizing volunteer searches.

"We don't believe she's gone or anything like that," he said. "We think somebody just has her."

Deena's ex-boyfriend was the last person to see Phylicia, according to police and the girl's parents. Most of Phylicia's clothing and shoes were left inside her sister's apartment, and she didn't have much money, Russell Barnes said -- an indication that even if she left of her own volition, she didn't plan to be gone long.

"She didn't know anything about Baltimore city," Russell Barnes said. "She would never leave her sister, really. She loves her sister."

As the Barnes case has made the national media rounds, Guglielmi began describing it as "Baltimore's Natalee Holloway case," referring to an Alabama teen whose disappearance in Aruba became a cable news sensation.

The Barnes case has been featured on CNN's "Nancy Grace" and NBC's "Today" and "Nightly News," among other programs. While it hasn't gotten as much airtime as the Holloway case or other stories about missing teenagers, Sallis said she doesn't feel slighted by the coverage.

"My daughter is not the only child that's missing. Other children need their time too," Sallis said. "I appreciate all that has been done for her and us thus far, and it's quality, not quantity that's important to me."

If Barnes had been struggling with any troubles before the Christmas holiday, officials at Union Academy said it didn't show through in her academics or extracurricular activities.

Hoping to study medicine or psychiatry, she had been accepted to several colleges already and was preparing applications for Johns Hopkins University and the University of Maryland. In her spare time, Barnes had been doing community service at a daycare center and by tutoring fellow students in need of academic help.

"She appeared to be very happy, a very happy girl. No concerns. No red flags," senior counselor Chrissy Rape said.

Barnes' disappearance cast a heavy cloud over the beginning of the school's second semester, but Rape said students and faculty alike were trying to maintain hope for her safe return and find ways to vent their frustration and fear.

Hundreds attended a prayer vigil as classes resumed for the spring term. More than 500 yards of ribbon in purple -- Barnes' favorite color -- has been turned into ribbons worn by hundreds of students. Students can write messages to Barnes on posterboards hanging throughout school halls.

"When she does return, we're going to give her all these things ... and hope that it will help her when she comes home," Rape said. "We hold out faith and hope that she will come home. We are very optimistic here at school."