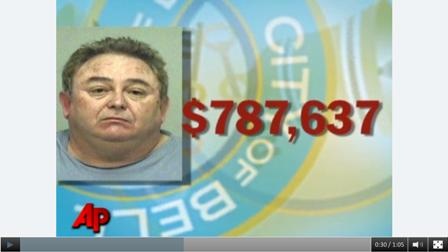 LOS ANGELES — Officials say an ex-city manager and mayor are among eight people arrested in a corruption investigation in the scandal-plagued Los Angeles suburb of Bell.
The district attorney's office announced Tuesday that ex-city manager Robert Rizzo and Mayor Oscar Hernandez were arrested along with several council members.
The Skanner News Video here
The district attorney, state attorney general and others have been conducting investigations of officials in the small working-class city since it was disclosed they were paying themselves huge salaries. Rizzo was making nearly $800,000 a year.
The investigations involve allegations of corruption, misuse of public funds and voter fraud.
A message left at Rizzo's Huntington Beach home was not immediately returned.
THIS IS A BREAKING NEWS UPDATE. Check back soon for further information. AP's earlier story is below.
LOS ANGELES (AP) — Eight current and former Bell city officials were arrested Tuesday as part of a corruption probe in the small, working-class city of Bell, where residents were outraged after learning officials were paying themselves hundreds of thousands of dollars in salaries.
The suspects were booked Tuesday into county facilities and will be kept away from other inmates for their protection, Los Angeles County sheriff's spokesman Steve Whitmore said.
He would not release the names of those arrested, though the district attorney's office scheduled a news conference to discuss details.
The arrests were the latest twist in a scandal that emerged in July with the disclosure that City Manager Robert Rizzo was paid nearly $800,000 a year — almost twice the salary of President Barack Obama.
Since then, authorities have been investigating allegations of corruption, misuse of funds, racial profiling and voter fraud in the city where one in six of the 40,000 residents live in poverty.
It also was revealed that former Police Chief Randy Adams was making $457,000 a year, and Assistant City Manager Angela Spaccia was paid $376,288. Four of the five City Council members paid themselves nearly $100,000 a year for their part-time service.
Rizzo, Adams and Spaccia resigned and the council members reduced their salaries to about $8,000 following the disclosures and angry public reaction. The four council members are currently the target of a recall.
The city is under investigation by the district attorney's office, state attorney general and the U.S. Justice Department. Its finances are being audited by state Controller John Chiang's office.
Last week, Attorney General Jerry Brown sued eight current and former officials of Bell, accusing them of defrauding taxpayers by granting themselves salaries he said were far higher than warranted for the jobs they were doing.