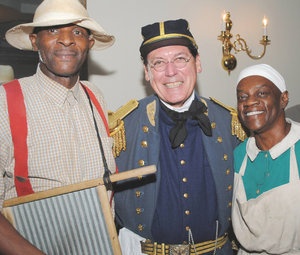 This photo of State Sen. Glenn McConnell, Frank and Sharon Murray has touched off a furor.

CHARLESTON, S.C. (AP) -- NAACP leaders said Thursday a photo of a South Carolina Senate leader in a Confederate uniform posing with blacks in costumes reminiscent of slavery is another blow against the state.
``This is just another blight,'' said Dot Scott, the president of the Charleston branch of the National Association for the Advancement of Colored People. ``The big picture is how little progress we have made in being human beings in this state,'' said Lonnie Randolph, the president of the civil rights organization in the state.
But Senate President Pro Tempore Glenn McConnell and one of those he posed with say the photo simply shows parts of the state's culture.
During a meeting of the South Carolina Federation of Republican Woman in Charleston last week, McConnell posed with two members of a black Gullah-Geechee cultural group in period costumes. One wore suspenders and a floppy wide-brim hat and carried a washboard. The other wore a plain green dress, an apron and a head scarf.
Gullah in the Carolinas and Geechee in Georgia and Florida are part of the sea island culture of slave descendants along the Southeast coast.
McConnell, a white Civil War re-enactor and enthusiast told newspaper reporters in Columbia and Charleston the photo shows how far race relations have come in the state.
``Tell me what is offensive about having the differing parts of the culture there?'' McConnell asked earlier. ``This picture says, if anything, how we cross cultural lines.'' He did not immediately return several phone messages from The Associated Press.
The picture caused an uproar when it started showing up on Web sites this week, following months of unflattering publicity the state has endured from other incidents involving politicians.
McConnell said the Republican event was conducted last week in a respectful, historical context.
Sharon Murray, who with her husband Frank has been working for the preservation of Gullah culture for two decades, said she was invited to the meeting to represent one of the cultures of South Carolina. McConnell also attended in uniform.
``The clothing we wear is 1860s skilled artisans wear,'' Murray said. ``We have never said that we are trying to re-enact slave characters because we are not. That evening it was to introduce the Gullah culture.''
Scott said Murray has her history wrong.
``They are dressing as we were -- as our ancestors were at that time. We were slaves,'' she said. ``In 2010, while we're trying to say we're in a post-racial era, South Carolina's elected officials both locally and nationally have continued to do things that are really atrocious.''
Randolph said people would be outraged if there were re-enactments of the massacre at Wounded Knee, the dropping of the atomic bombs on Japan or of the Nazi persecution of Jews.
``Do you think that America or the world would accept that?'' he asked. ``But we can do what America did for almost 350 years -- just minimize the humanity of one group of people.''
Charleston is where the first shots of the Civil War sounded in a state where Jim Crow-era policies and the lawsuit that led to the 1954 landmark Brown v. Board of Education decision outlawing segregation originated.
South Carolina has been the focus of unflattering attention in recent months after officials apologized for likening an escaped gorilla to an ancestor of first lady Michelle Obama and referring to President Barack Obama and Republican gubernatorial candidate Nikki Haley as ragheads.
Then there was South Carolina U.S. Rep. Joe Wilson's heckling of Obama in Congress by shouting ``You lie!''
Murray said she and her husband have posed during the years with numerous re-enactors portraying soldiers from both the North and South.
During the Charleston meeting, she said the couple discussed Gullah culture and sang the hymn ``Heaven Belongs to You'' with the audience.
``The basis of that song is if you pray right, if you act right, if you treat people right -- if you do all of that then heaven belongs to you,'' she said.
She said when she saw the Internet comments about the picture she thought it ironic.
``We are hearing so many things that contradict if you pray right, and act right and treat people right,'' she said.