Video: Fema Says Us Evacuations May Be Required for Earl 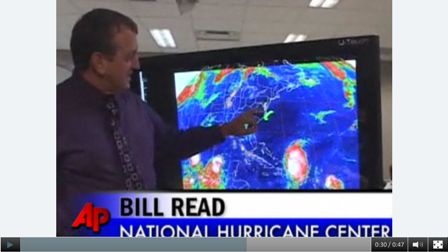 RALEIGH, N.C. (AP) -- Federal officials say evacuations may be required in the U.S. if Hurricane Earl tracks too close to the East Coast.
Federal Emergency Management Agency administrator Craig Fugate said Tuesday that people along the eastern seaboard should be prepared in case evacuations are necessary later this week.
Officials will be closely monitoring the movement of the Category 4 storm to determine which parts of the coast will face the greatest impact. It's too early to tell right now what those might be.

Earl is forecast to potentially brush North Carolina late Thursday before running parallel to land up the East Coast on Friday and Saturday.
FEMA already has teams deployed in the Virgin Islands, Puerto Rico and North Carolina. It has advance teams prepared to work with other states up the coast.
THIS IS A BREAKING NEWS UPDATE. Check back soon for further information. AP's earlier story is below.
PROVIDENCIALES, Turks and Caicos (AP) - Islanders wary of a possible blow from powerful Hurricane Earl pulled boats ashore and packed supermarkets on the Turks and Caicos on Tuesday as the Category 4 storm howled over open seas toward the eastern United States.
The hurricane, with winds of 135 mph (215 kilometers), was expected to remain over the open ocean east of this British territory before turning north and running parallel to the U.S. coast, potentially reaching the North Carolina coastal region by Friday. It was projected then to curve back out to sea, perhaps swiping New England or far-eastern Canada.
"There is still considerable uncertainty as to how close the hurricane will come to the U.S. East Coast," the U.S. National Hurricane Center in Miami said in a bulletin Tuesday.
Earl delivered a glancing blow to several small Caribbean islands on Monday, tearing roofs off homes and cutting electricity to people in Anguilla, Antigua, and St. Maarten. Cruise ships were diverted and flights canceled across the region. But there were no reports of death or injury.
In Providenciales, Benson Capron was among several fishermen tying their boats to trees lining a beach.
"I hear it is going to pass, but I will not take any chances," Capron said. "Today I will not go out to fish."
The Hurricane Center said it was too early to say what effect Earl would have in the U.S., but warned it could at least kick up dangerous rip currents. A surfer died in Florida and a Maryland swimmer had been missing since Saturday in waves spawned by former Hurricane Danielle, which weakened to a tropical storm Monday far out in the north Atlantic.
Craig Fugate, administrator of the Federal Emergency Management Agency, said Earl's approach ought to serve as a reminder for Atlantic coastal states to update their evacuation plans.
"It wouldn't take much to have the storm come ashore somewhere on the coast," Fugate said. "The message is for everyone to pay attention."
The storm's center passed just north of the British Virgin Islands on Monday afternoon. Despite a few lost fishing boats and several uprooted trees in Tortola and Anegada, there were no reports of major damage or injuries, said Sharleen DaBreo, disaster management agency director.
Early Tuesday, Earl's center was about 230 miles (370 kilometers) east of Grand Turk island as it headed west-northwest at 13 mph (30 kph), according to the hurricane center. Hurricane strength winds extended up to 70 miles (110 kilometers) from the center, it said.
Tropical storm conditions were expected to spread into the Turks and Caicos by Tuesday afternoon, with a potential for above normal tides and dangerous tides. The territory was under a tropical warning and a tropical storm watch was in effect for the southeastern Bahamas.
Close on Earl's heels, Tropical Storm Fiona formed Monday afternoon in the open Atlantic. The storm, with maximum winds of 40 mph (65 kph), was projected to pass just north of the Leeward Islands by Wednesday and stay farther out in the Atlantic than Earl's northward path. Fiona wasn't expected to reach hurricane strength over the next several days.
The rapid development of Earl, which only became a hurricane Sunday, took some islanders and tourists by surprise.
In Anguilla, several utility poles were down and a couple of roofs had blown away, but it was still too dangerous to go out and assess the full extent of damage, said Martin Gussie, a police officer.
At El Conquistador Resort in Fajardo, Puerto Rico, people lined up at the reception desk, the lights occasionally flickering, to check out and head to the airport. There, more delays awaited.
John and Linda Helton of Boulder, Colo., opted to ride out the storm. The couple, celebrating their 41st wedding anniversary, finished a cruise Sunday and planned to spend three days in Puerto Rico.
"There was a huge line of people checking out as we were coming in, and I thought it was just that summer vacation must be over," said John Helton, a real estate appraiser. "But we paid for the room, so we might as well stick it out."
"I don't think we could get a flight even if we wanted to leave," Linda Helton added.
In St. Maarten, sand and debris littered the streets, and winds knocked down trees and electricity poles and damaged roofs. But police spokesman Ricardo Henson said there was no extensive damage to property.
In Antigua, at least one home was destroyed but there were no reports of serious injuries. Governor General Dame Louise Agnetha Lake-Tack declared Monday a public holiday to keep islanders off the road and give them a chance to clean up.
---
Associated Press writers Ben Fox in Fajardo, Puerto Rico, Anika Kentish in St. John's, Antigua, Judy Fitzpatrick in Philipsburg, St. Maarten, and David McFadden, Mike Melia and Danica Coto in San Juan and contributed to this report.