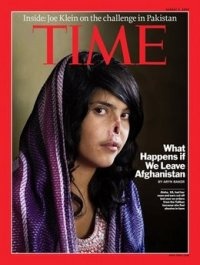 NEW YORK – The face on the cover of Time magazine is graceful, composed and unthinkably maimed. The heart-shaped hole where 18-year-old Aisha's nose should be is a mark of Taliban justice — a visceral illustration, the headline suggests, of "what happens if we leave Afghanistan."
The portrait has quickly become a symbol of the stakes of a nearly decade-old war. It has been brandished before House Speaker Nancy Pelosi on television, dissected in online commentary and extrapolated into a conversation-starter about topics ranging from anti-abortion activism to violence against women.
"Disturbing on so many levels," Cory Albrecht, a telecommunications technology worker in Kitchener, Canada, wrote of the photo on his Twitter feed. And "completely necessary, unfortunately," he added by e-mail.

If the response proves it's still possible for pictures to provoke a visually saturated culture, it also shows how much viewers have come to accept graphic images. Time braced for an outcry — even consulting psychologists about how the photo might affect children — but relatively little of the ensuing discussion has centered on the graphic nature of the image.
Under orders from a Taliban commander acting as a judge, Aisha's nose and ears were sliced off last year as punishment for fleeing her husband's home, according to Time's story and other accounts. She said she fled to escape her in-laws' beatings and abuse.
Now in a women's shelter, she is set to get reconstructive surgery in the U.S., with the help of Time, humanitarian organizations and others.
Aisha posed for the Time cover photo because she wanted readers to see the potential consequences of a Taliban resurgence, the magazine said. Prominent Afghan women have expressed concerns that a potential government reconciliation with the insurgents could cost them freedoms they have gained since the 2001 U.S.-led invasion toppled the former Taliban regime.
The photo was shot by freelancer Jodi Bieber, and Time's Aryn Baker wrote the story.
Since the magazine hit newsstands Friday, the photo has been discussed on many news shows, including ABC's "This Week," when host Christiane Amanpour held it up and asked Pelosi about America's commitment to Afghan women as the U.S. weighs its future involvement in their country. Pelosi looked away before replying that educational and other goals for Afghanistan's women depend on establishing security and ending corruption.
The picture and story have elicited more than 500 comments on Time's website alone, plus countless others on social networks and websites ranging from the political behemoth The Huffington Post to BagNews, a forum for dissecting photography. While it's too early to gauge whether the piece affected the magazine's sales, it already has brought in more than twice as many e-mailed letters to the editor as hot-button issues usually generate, the magazine said.
"It's provoked a tremendous amount of conversation, which is exactly what we wanted," Time Managing Editor Richard Stengel said. "It both gets people's attention and kind of repels people's attention, but it commands you to look at it and have an opinion about it."
Some observers have invoked comparisons with one of photojournalism's most enduring images: the arresting, green-eyed refugee girl who appeared on National Geographic's cover in 1985 and became an emblem of Afghanistan's suffering under Soviet occupation.
But if Aisha is the new "Afghan girl," some feel she's being used as a poster child for a political message.
"It's not the photo," journalist Irin Carmon wrote on the feminist blog Jezebel. "It's the headline. ... There is an elision here between these women's oppression and what the U.S. military presence can and should do about it."
At least some commentators, including some writing from Muslim perspectives, are troubled by the photo itself or its placement on the cover of a magazine with a 3.25 million-copy print circulation and a website that drew nearly 9 million unique U.S. viewers last month.
Hofstra University anthropology professor Daniel Martin Varisco wrote on the Islam scholars' blog, Tabsir, that the cover photo is an "unfortunate example of sensationalized news reporting" that downplays the gains Afghan women have made.
Krista Riley, a sociology graduate student and contributor to a Muslim women's website, Muslimah Media Watch, finds the photo "invasive and deeply troubling." To Riley, the image plays into racial divides and cultural distances.
Photojournalists have long grappled with how and when to use graphic pictures, balancing a belief in telling difficult truths with consideration for the sensitivities of the subjects and of readers.
American media outlets have become more open to publishing such photos as they face competition from an anything-goes online universe for an audience increasingly inured to violent images from entertainment, said Kenneth Irby, the lead visual-journalism expert at the Poynter Institute.
Stengel said he deliberated at length about using Aisha's portrait, which was accompanied by an editor's note explaining his rationale and apologizing to readers who might object.

Still, some have responded to the photo by adopting Aisha as an image of far more than Afghanistan's struggle or journalism's role in shaping it.
Jill Stanek, an anti-abortion activist and blogger, draws parallels between the Time picture and the graphic photos her fellow activists sometimes use to press their cause. Lemondrop, a women's lifestyle blog maintained by AOL, cast Aisha's portrait as a chastising reminder for the appearance-conscious. The Pixel Project, an online group that works to combat violence against women, saw it as a call to action.
Founder Regina Yau called it "a teachable moment."