Lisa Loving of The Skanner News
Published: 20 May 2010 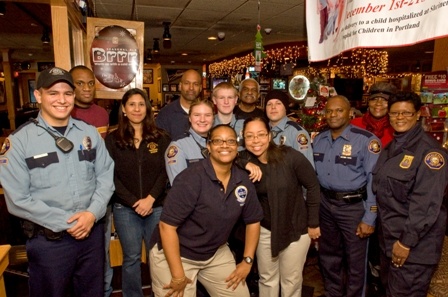 The local chapter of the National Organization of Black Law Enforcement Executives holds its annual Take 25 event Friday, May 21 at the Blazers Boys and Girls Club on Martin Luther King Jr. Boulevard  from 2 to 6 p.m., in coordination with the National Center for Missing and Exploited Children.

Parents are urged to take 25 minutes to talk to their school-aged children about personal safety, as volunteers from the NOBLE chapter help create free emergency identity kits for the kids that include their fingerprints, physical description and school photos.
As the identity kits are given to the families to take home, participants are encouraged to take a close look at the photo displays of children currently missing and thought to be in the area.
The NOBLE event – held around the country at the same time every year -- caps a week in which journalist Dan Rather placed a harsh light on Portland's child prostitution trade with a special report on HD-TV called "Pornland, Oregon."
Based on interviews with law enforcement and particularly the Portland Police Vice Squad Chief Doug Justus, who describes the sexual trafficking in girls as young as 12, Rather argues the problem is out of control.
Some of the young victims are runaways, some are part of the foster care system, but increasing numbers of child prostitutes are coming from middle class homes, Rather says.
Meanwhile, Jackson and local African American law enforcement professionals have been working with families for the past 10 years to make sure lost or exploited kids are returned home as quickly as possible.
"Take 25 is a public event, we just usually hold it in an area where there are numbers of children," said Officer Marci Jackson of the Portland Police Bureau.
"Parents or guardians can bring their youngsters, basically you're looking at school-aged kids, they would do a fingerprint card, that goes home with the parents, and a little ID packet that goes home with the parents for them to attach their current school pictures.
"That's just in case that child is lost we have some information, a description, a current picture, fingerprints and everything is already available," she said.
Another big part of the annual event is for officers from the community to make contact with families before there is a crisis – so that if something goes wrong, parents will know who to call, when to call, and what to expect.
"If your child is missing, you're in "oh my God" – that's where a parent is most of the time, and so we're asking for height, what are they wearing, a current picture, and so the quicker that you can get that kind of information the better it is," she said.
NOBLE President Dana Lewis, a detective with Portland Police's missing persons unit, will be on hand, as will many other volunteers from the entire region.
"Basically it's interaction with law enforcement and NOBLE is not just Portland police, we have Washington County, Multnomah County, our former president is ATF (Federal Bureau of Alcohol, Tobacco and Firearms), but we are all law enforcement agencies," Jackson said.
Take 25 is also important as a way to keep the faces of kids still missing out in the public, Jackson said – to remind community members that all of us have a responsibility to try to keep missing and exploited children off the streets.
"It's about looking around your community, knowing the faces of the children that are missing and looking for children that are still missing,' she said.
Roman Catholic nuns from Seattle have spearheaded a campaign to stop human trafficking using bus ads with the slogan "Stop the Demand."
Sister Susan Francois and the Intercommunity Peace and Justice Center have since 2008 promoted free events in Washington and Oregon providing information on human trafficking with a focus on ways local residents can take action on the issue.
In a 2008 interview with The Skanner News, Francois said the nature of the issue makes it hard to quantify and to address.
"It's also a federal offense, and the law enforcement statistics are probably pretty small in terms of what the actual situation probably is," Francois says. "Washington state has about 40 cases a year, Oregon has about 40 to 50 cases a year that are prosecuted, but because people are not aware of it, it's really a much larger thing."

What can local people do to stop the problem?
Francois says it's important to talk with young men and women about their actions and look at the ways language is used to glorify exploitation.
"We can talk to our children, talk to our young men about the value of women and why they may not want to purchase sex services, we can talk to our young women themselves," she says. "It's really the paradigm shift in the language we use– a pimp, instead of a criminal, or a prostitute instead of someone who's being exploited into sex.
"We think there are many people out there doing little things here and there, and our goal is to connect all those people, and then people who may not know about this can come and see how they can be dialed in," Francois says. "Because they say it takes a village to raise a child, but it's going to take the community of the Northwest to stop this here."
Find out more about NOBLE at http://www.noblenatl.org/.
For more information on the Stop the Demand campaign, go to www.stopthedemand,org.